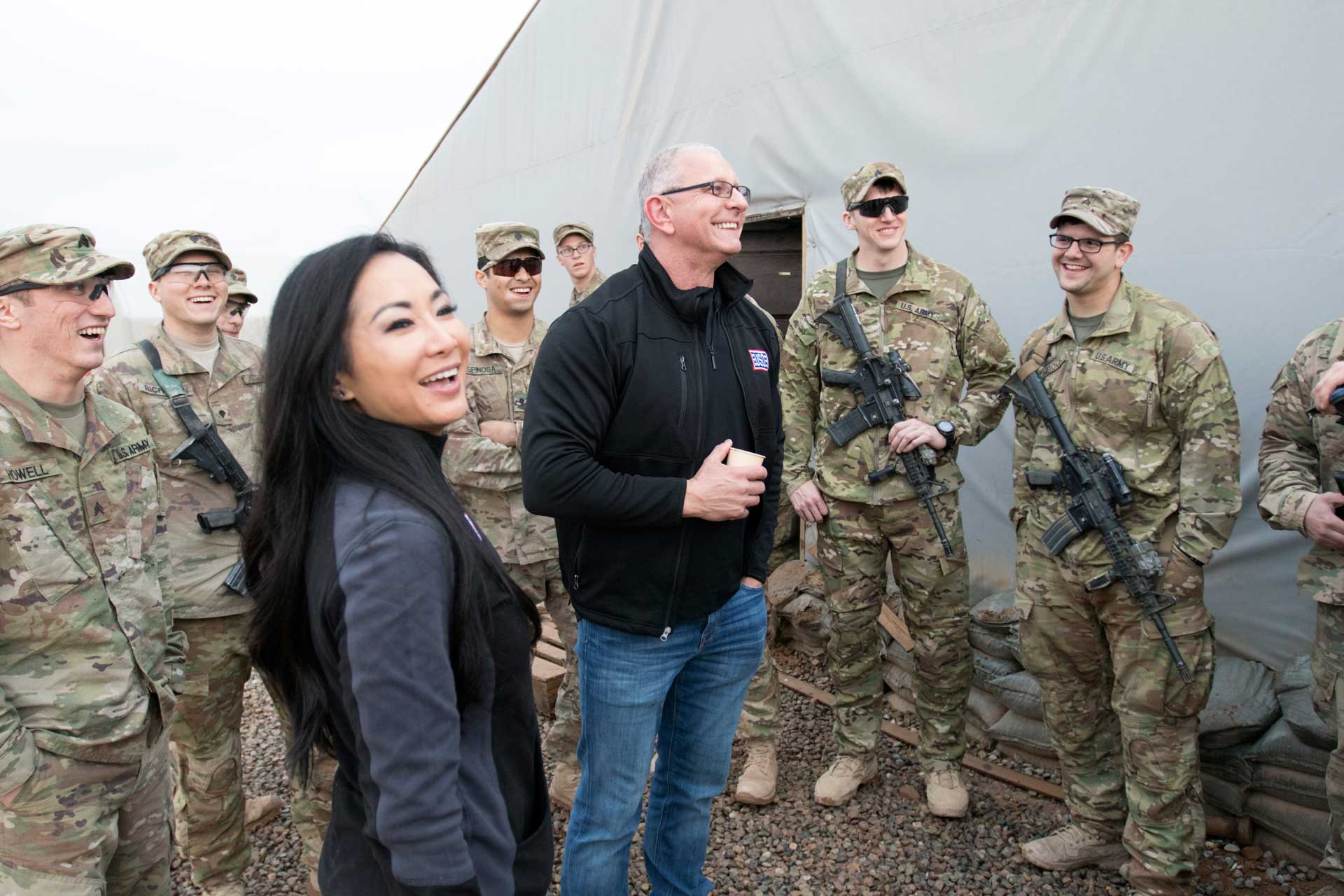 Two of the most valuable lessons that Robert Irvine ever learned are these: 1) A free society can only be free because of the brave men and women who serve its military; and 2) The more we share, the more we ultimately have. Giving for the sake of giving is its own reward. Giving to those who defend the nation serves an even higher, and necessary, purpose.

These two lessons combined to serve as the guideposts for Robert’s career. Indeed, much of his work on television over the past decade has been focused on lifting others up. But even when he’s not working, Robert has been using nearly every spare moment of his free time to volunteer. For the past several years, that volunteering is done primarily for the USO and as an ambassador to the Gary Sinise Foundation. In 2016 he spent 65 full days volunteering his time and talent to these and other charitable organizations, visiting military bases here in the U.S. and war zones throughout the Middle East, including spending Christmas Day in Iraq with his wife, Gail.

These lessons also form the backbone of The Robert Irvine Foundation, which raises money and issues grants to military charities and other organizations who work directly with veterans and those currently serving to improve their way of life. The Robert Irvine Foundation also accepts applications and provides direct grants to the veterans and their families who need it the most.

In the 2016 fiscal year, the foundation raised $101,812 through corporate and individual donors, with a portion of this total being allotted by Robert Irvine Foods and Robert Irvine Products. The full 100% of the total donations received was distributed through the foundation’s grants program.

“It was a great year for the Foundation and I’m happy we were able to help so many great organizations and people in need,” said Chef Irvine. “We will use 2016 as a building block to even bigger things in 2017. Being able to make a positive impact is what drives me.”

“Our military members selflessly give so much to protect our freedom,” said Ginger Longstaff, Executive Director of Robert Irvine Foundation. “We know we can never fully repay our service members and their families for the sacrifices they have made. By giving to these great programs we hope to show our men and women in uniform just how much our society appreciates those sacrifices.”

The following organizations and programs received those grants in 2016:

American Veterans Center
The mission of the AVC is to guard the legacies and honor the sacrifices of all American veterans. Through oral history preservation, educational programs and civic events, the AVC preserves the stories and lessons of veterans past and present, from which future generations can learn. This year’s grant was used to fund transportation support for the 2017 National Memorial Day Parade. The National Memorial Day Parade, held annually along Constitution Avenue in our nation’s capital shares the story of American honor and sacrifice from across generations. The parade, commemorating its 12th year, is our nation’s largest Memorial Day event, drawing hundreds of thousands of spectators to the National Mall to pay tribute to those who have served, are serving, and most importantly, those who have made the ultimate sacrifice while in service to our country.

The National Memorial Day Parade is a moving timeline of American military history, honoring those who have served and sacrificed from the American Revolution to the present day. It draws on the tradition of Memorial Day parades, going back to the beginning of the holiday just after the Civil War, to create a family-friendly event aimed at calling attention to the true meaning of Memorial Day—honoring our fallen heroes. For more information: http://www.americanveteranscenter.org

Buddy Cruise
Buddy Cruise is a 501c3 non-profit charity providing educational opportunities and resources for families, while promoting awareness, acceptance, and inclusion for individuals with Down syndrome and developmental delays through unique venues.

The programs offered by Buddy Cruise are not only beneficial for families touched by Down syndrome but other special needs as well. A Buddy Cruise gives participants the opportunity to gain information through educational workshops and events, and to network and form lasting bonds with other families from across the globe who are in similar situations. Families who have a hard time finding a scenario to meet all family members’ needs are accommodated with a variety of activities for all ages and abilities. For more information: http://www.buddycruise.com

Crossroads Corral
Crossroads Corral is a 501(c)(3) non-profit charitable organization based in Central Florida that provides Equine Assisted Therapy and learning activities for active military members and veterans who suffer from PTSD, as well as youth and women who have suffered trauma, abuse and neglect. For more information: http://www.crossroadscorral.org

Gary Sinise Foundation
The experiences of war leave an indelible impact on our servicemen and women. As they return to civilian life, the physical, emotional and psychological challenges they face are often difficult. As citizens, supporting the heroes of our nation is a responsibility each of us must carry. The Gary Sinise Foundation works to ensure the sacrifices of America’s defenders and their families are never forgotten.

For more than a decade, Gary Sinise & the Lt. Dan Band have toured the globe in support of our troops. As a part of the Foundation, the band is raising spirits and awareness for military and first responder causes worldwide.

Through its Invincible Spirit Festivals, the Gary Sinise Foundation is boosting the morale at military medical centers across the country. These daylong celebrations provide a respite from the rigors of rehabilitation for the hospital’s patients, staff and families. The Relief & Resiliency Outreach program is providing complete support to those recovering from trauma, injury and loss during times of urgent need. The Foundation is also providing financial support and training to America’s firefighters, police departments and EMTs through its First Responders Outreach program.

Additionally, the Gary Sinise Foundation is showing appreciation through Serving Heroes, a program providing hearty, classic American meals to our defenders across the country. The Arts & Entertainment Outreach program now includes the Steppenwolf Theatre in Chicago and the Geffen Playhouse in Los Angeles. Each theatre provides dinner and a performance to local veterans free of charge.

In 2015, the Gary Sinise Foundation launched Soaring Valor with The National WWII Museum. The program provides WWII veterans a chance to visit the museum and documents their first-hand accounts of the war for future generations. For more information: http://www.garysinisefoundation.org

Semper K9
Semper K9’s mission is to enhance the quality of life for wounded, critically-ill and injured members of the U.S. Armed Forces and their families by providing them with assistance dogs. Using rescued and donated dogs, Semper K9 provides service dogs for psychiatric alert and mobility challenges free of charge to wounded service members. This year’s grant from the Robert Irvine Foundation was used to retrain a service dog to meet the new needs of his veteran. For more information: http://www.semperk9.org

Valor Service Dogs
Valor Service Dogs is a 501c3 tax-exempt nonprofit organization that helps post-9/11 wounded veterans regain their independence, return to civilian life, and maintain successful partnerships through the training and placing of mobility assistance and PTSD service dogs. In addition to aiding their veterans in community reintegration, both physically and psychologically, Valor Service Dogs brings awareness and education to the public on service dogs, their training, and the laws that allow service dogs to be active members of society. For more information: http://www.valorservicedogs.org

USO Metropolitan Washington
The USO was founded in preparation for World War II by national leaders who understood that maintaining high morale in a fighting force is vital to a nation’s military success. Over time, the USO has become the vital bridge between Americans and their military service members. The USO is a family of volunteers, sustained by the charitable contributions of millions of generous Americans. The USO is united in its commitment to support America’s service members by keeping them connected to the people, places, and things they love. The USO does this through countless acts of caring, comfort, connection, and support. Its work is America’s most powerful expression of gratitude to the men and women who secure our nation’s freedoms.

USO of Metropolitan Washington-Baltimore is the largest chapter chartered by the USO. Ten locations and a “deployable” Mobile USO provide signature USO services to the nearly 300,000 military members and their families living in the region and the 150,000 who travel through our local airports.

USO-Metro is a nonprofit 501c3 organization chartered by Congress, and dedicated to serving those who serve, and their families in Washington D.C., Maryland and Northern Virginia. It is through the generous financial support of individuals and organizations in the local community that USO-Metro is able to fulfill its mission. With the help of thousands of devoted volunteers, USO-Metro provides programs and services for active duty troops and their families at area military hospitals, six USO Centers, four USO airport lounges and a Mobile USO. Signature programs and services include holiday programs like Turkeys for Troops and Project USO Elf, emergency housing and food assistance, and caring for our wounded, ill and injured troops and their caregivers. For more information: us.uso.org/WashingtonBaltimore/