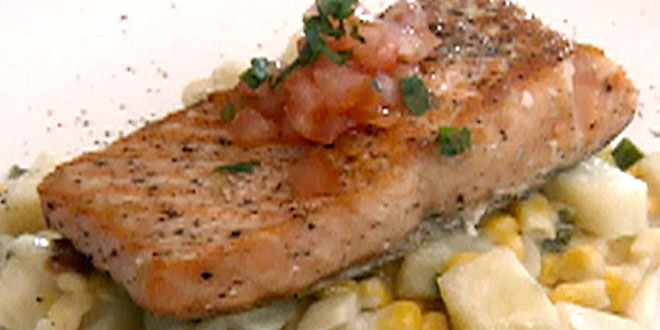 In a medium pot, heat the chicken broth to a simmer. In a separate large saute pan heat half the oil (1/4 cup). Add the diced onion, garlic, and corn kernels. Use a wooden spoon to saute together until the onions appear translucent, about 5 minutes. In a large bowl, toss the diced potatoes with the remaining (1/4 cup) oil and season them with salt and pepper. Add the potatoes to the saute pan with the onion, garlic and corn. Stir with a wooden spoon and allow surface of potatoes to toast lightly. Gradually add the heated chicken broth to the saute pan just enough to cover the potatoes and corn mixture. Over a medium to medium high heat, the potatoes will cook in the broth and by the end of cooking time; most of the liquid should evaporate. If the broth has boiled away before the potatoes are cooked, add more broth in an amount that is just enough to cover. Be careful to neither burn the potatoes nor allow them to turn too soft. When the potatoes are done, a fork can easily go through, remove from the heat, stir in the heavy cream and season with salt and pepper, as needed.

Trim the salmon by removing a 1 1/2-inch strip from the belly side. Divide into 5 ounce portions, leaving the skin on. Season with salt and pepper. Heat 1/4 cup oil in a large oven safe skillet over high heat. Sear fillets beginning with flesh side down first. Do not disturb the fillets for the first 2 to 3 minutes; do not even shake the pan. You will see the surface of the salmon beginning to caramelize. Flip the fillets so that the skin side is now down, and sear until skin is lightly crisped. Transfer fish to a baking dish in the oven to finish. Fish is done when flesh springs back when touched, internal temperature of 140 degrees F. Do not overcook, as fish will continue to cook for a few minutes even after it is removed from oven, known as carryover cooking. (Remember to use oven mitts for the handle when removing that pan from the oven.)

Spoon potato/corn “risotto” in center of serving plate. Top with the salmon, and garnish with chives