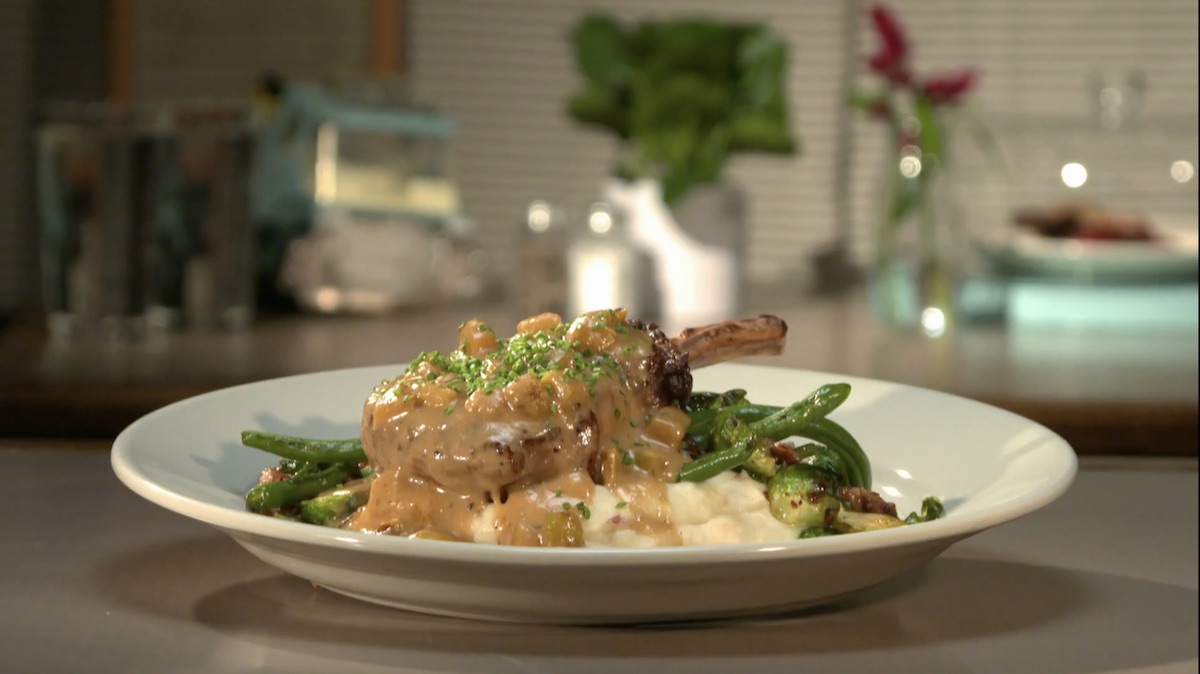 From the Episode “Not So Peachy Keen”

Mashed Potatoes
1. Bring a large saucepot of salted water to a boil.
2. Add potatoes, bring to a boil and cook until fork-tender. Drain the potatoes from the water.
3. In a separate small saucepan heat butter, milk, and heavy cream.
4. Using a potato masher, or an electric hand mixer, slowly blend butter, milk, and heavy cream mixture into the cooked potatoes.
5. Potatoes should be smooth and creamy.
6. Season with salt and pepper to taste and keep warm.

Apple Brown Butter sauce
1. In a large saucepan, add the butter and allow it to slightly brown.
2. Next, add onions, apples, and sage and allow to cook for approximately 4 minutes.
3. Whisk in flour and cook for approximately 2 minutes.
4. Deglaze the pan with white wine, allow to come to a simmer
5. Add the chicken stock, stir well, and continue to cook for another 20 minutes until the sauce thickens. Season with salt and pepper to taste.

Pork Chop
1. Pre-heat an oven to 400 degrees
2. Place the green beans and brussels sprouts on a baking sheet.
3. Drizzle with 2 tbsp of the grapeseed oil and season with salt and pepper.
4. Place the seasoned green beans and brussels sprouts in an oven. Cook for approximately 10 to 12 minutes until slightly roasted and tender.
5. Remove both brussels sprouts and beans from the oven.
6. Then place them in a skillet over medium-high heat and cook for approximately 4 minutes. Season again with salt and pepper, if needed.
7. In a large skillet over medium-high heat add the other 2 tbsp of grapeseed oil
8. Season the pork chops with salt and pepper, as needed.
9. Add the season pork chops to the hot sauté pan with oil and sauté for approximately 3 minutes on each side.
10. Remove cooked pork chops from the pan and place them on a baking sheet and finish in the oven for approximately 8 minutes
11. The pork chops should be cooked to an internal temperature of 145 F degrees.

Plating the Dish
1. On a large dinner plate, place a large scoop of mashed potatoes in the middle.
2. Next top, the mashed potatoes with the cooked green beans and brussels sprouts
3. Top the vegetables with the pan-seared pork chop.
4. Top the pork chop with the apple brown butter sauce.
5. Garnish the dish with the chopped chives and serve.