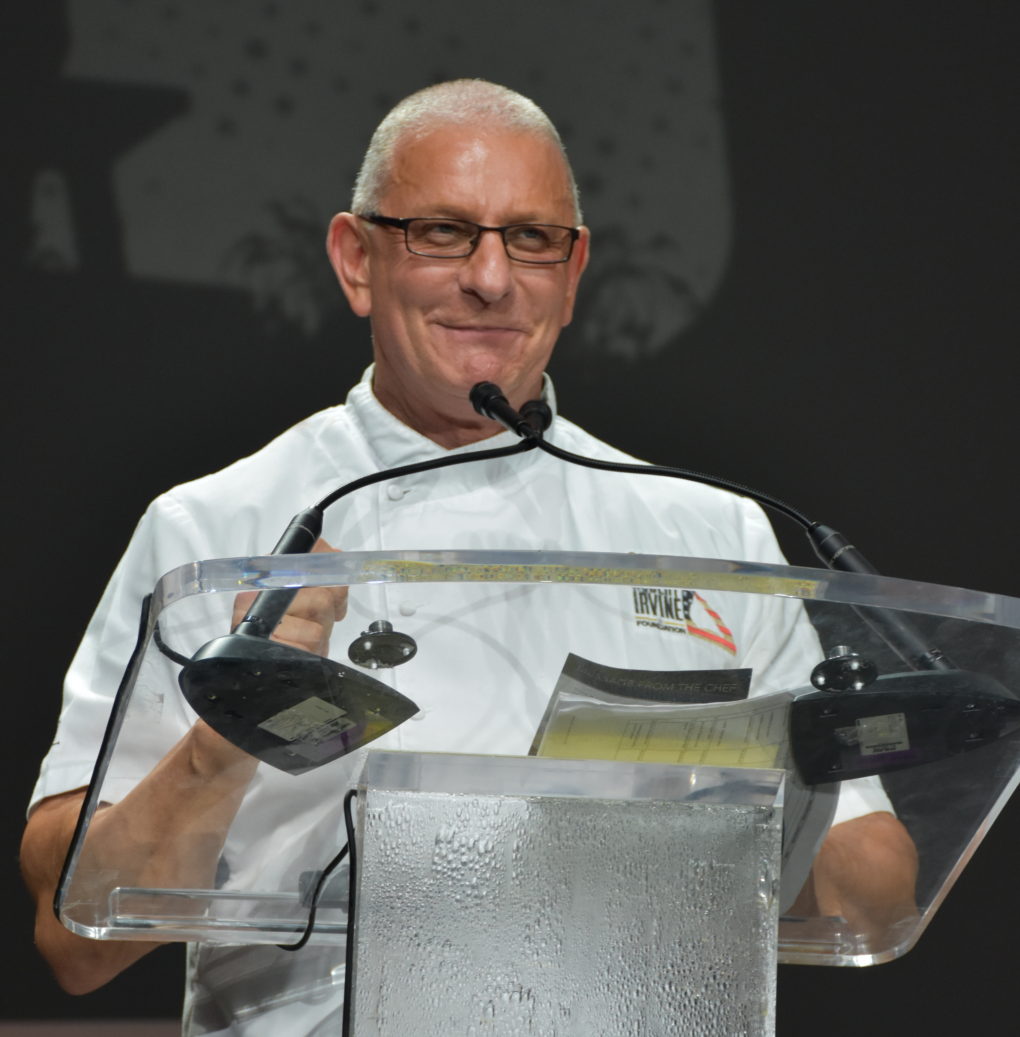 Robert Irvine cooked the dinner. Martina McBride sang her hits. And sponsors and guests combined to donate $2.4 million to military veterans at Skyball XVII, a colossus of a charity event that needs to be seen to be believed.

American Airlines’ Hangar 5 at Dallas-Fort Worth International Airport has a footprint of 337,650 square feet—or nearly eight acres—which is bigger than most sports arenas and entertainment venues. Suffice it to say that “massive” isn’t a strong enough adjective to describe the place—or the military charity event it hosts every fall.

Now imagine this building cleared of all its planes and equipment, then set with hundreds of tables for a black-tie dinner for 2,400, cooked by none other than Chef Robert Irvine. Add in 17 Medal of Honor recipients, a silent auction, a classic plane-and-car expo, and a show-stopping performance by Martina McBride and you’ve at least got the nutshell version of Skyball, a one-of-a-kind charity event put on by American Airlines and the Airpower Foundation, with all proceeds going to the latter organization to help wounded veterans and their families.

When measuring any aspect of Skyball, which this year celebrated its 17th incarnation on Friday October 4 and Saturday, October 5, you wind up with some astronomical figures. It turns out that it takes quite a lot to organize and feed 2,400 guests (not to mention some 6,000 for the casual Friday night barbecue). That includes but isn’t limited to 2,200 pounds of New York sirloin steak, 400 pounds of baby zucchini, and 1,200 pounds of Granny Smith apples. All of this was prepped and transformed into a five-star meal by Irvine and his culinary team of Darryl Moiles, Shane Cash, and Brian Goodman, with the help of over 30 military chef volunteers and another 50 culinary student volunteers to help plate; together, they totaled over 1,800 man hours of labor getting ready for Saturday night.

But of all the big numbers that Skyball produces, none mean more than this: 2.4 million charity dollars, which the Airpower Foundation will put directly into the hands of programs that benefit America’s veterans.

“It’s a weekend where everyone honors the maxim of service above self,” said Irvine, whose own Robert Irvine Foundation was among one of the night’s many sponsors. “There are so many great heroes at Skyball – and over the course of the event you get to hear their stories and get a sense of the incredible sacrifices they’ve made for our freedom. Our sacrifice is very small by comparison; it’s time, talent, and for the corporate sponsors it’s food, transportation, lodging, and so forth. But we get to see firsthand the truth of the adage that many hands make light work. And when we’re all working together, we can do something pretty special for these brave men and women.”

To be sure, veterans are the real celebrity honorees at Skyball, despite the involvement of personalities like Irvine and McBride. Medal of Honor recipient Melvin Morris was attending his fourth Skyball and all weekend was surrounded by people who wanted to shake his hand and take a selfie. He appeared practically giddy to be there.

“I do enjoy being here,” said Morris, who earned the Medal of Honor while serving in Vietnam by leading an advance behind enemy lines to retrieve the body of a fallen sergeant. His citation, which he received during a pin-on ceremony with President Barack Obama in 2014, credits him with single-handedly destroying an enemy force with a bag of grenades, but not before being shot three times. “You get to meet people you would never meet, especially some of our other great heroes. And you meet people like Robert Irvine. I think it’s a great thing they’re doing to draw attention to veterans.”

Morris said the large sum of money raised is especially important now with the considerable strain being placed on our armed forces.

“When I came in the service, there was nothing. No support,” Morris said. “And you know the government is not going to step up when it comes to stuff like this because they look at it as not necessary. So, with civilians stepping up and donating and keeping us going, it’s important. We’ve got to keep that rolling. There are a lot of veterans that need to be recognized, and I really like what they’re doing here.”

Morris and the rest of the Medal of Honor recipients were honored onstage to rapturous applause during the middle of the event. But hundreds of other veterans, some of them legendary, also enjoyed the celebrity treatment at Skyball. 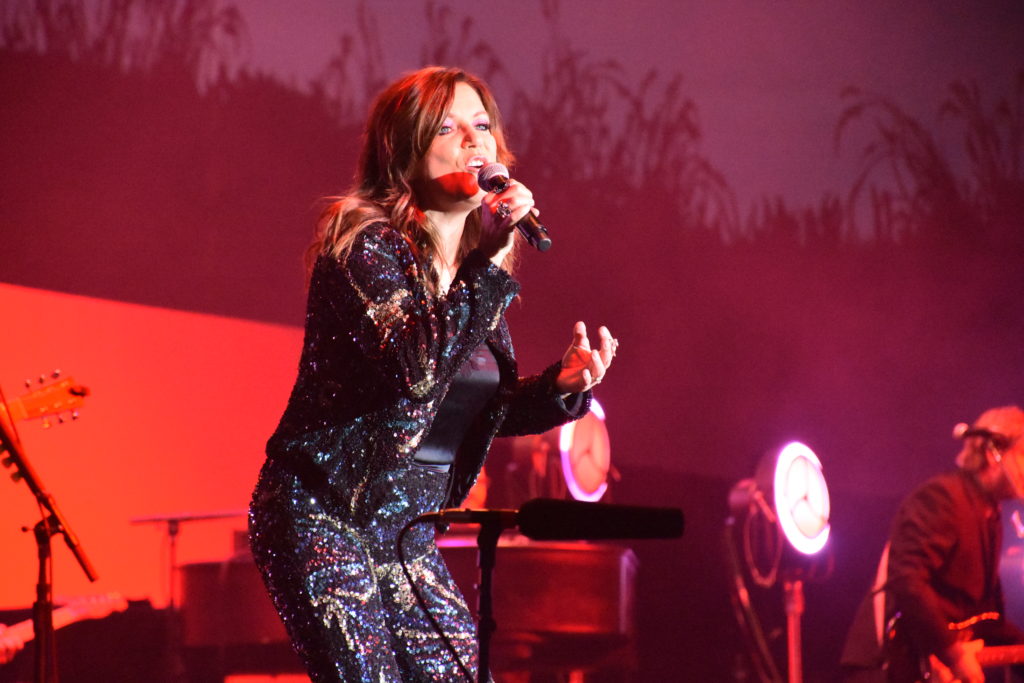 Ninety-nine-year-old World War II veteran Fiske Hanley held court during the VIP reception on Friday night at a table near the bar. Wearing his old-fashioned full dress uniform and sipping on a bourbon on the rocks, he spent much of the evening posing for pictures with other attendees. At one point when he was asked about his experiences, he gave a wry smile and said, “Look me up on that thing you’ve got there,” pointing to a guest’s smartphone. “You’ll read all kinds of stuff about me.”

Hanley’s B-29 bomber was shot down over Japan in January of 1945. He parachuted to safety, but was captured, imprisoned, and accused of war crimes for flying his bombing run. The full story is told in his book, Accused American War Criminal, which released in 2016 and will enter a reprint early next year. (In the meantime, you can shop the secondhand markets for it HERE.)

While proceeds benefitted the Airpower Foundation, it, like the Robert Irvine Foundation, does not run programs; instead, it issues all the funds raised as grants to charities that are engaged in the day-to-day business of providing job search help, service dog training, home renovations for the disabled, and much more. To that end, some of the people who run charity programs and research veterans’ issues—such as Dean Kamen, inventor of the iBOT wheelchair—were on hand to celebrate.

Several paralyzed veterans entered the event in an iBOT, which allows them to sit, but raises them up to standing height. The iBOT can transform up and down from traditional wheelchair height to standing at the press of a button. In a radical feat of engineering, Kamen’s invention provides perfect stability at full height on just two wheels, allowing easy access in and out of places that can be too tight for a typical wheelchair.

Kamen, a physicist and mathematician, has been working on the iBOT for over 20 years. He says it was born of a simple concept: A human being deserves better than a wheelchair.

“These people have literally given their arms and legs for this country,” Kamen said. “The idea that we give them a 200-year-old piece of crap that leaves them down at table-top level and that’s all we can do… Why don’t we give them muskets when they go out there and defend us?”

Kamen has spent his career designing medical equipment like stents and insulin pumps and selling them to the biggest medical supply companies. Despite the incredible technology in the iBOT, it was rejected by those same companies for its prohibitive cost; he estimates that each one would sell for $100,000 because they’re made in such small quantities. Kamen also said the veterans using iBOTs at Skyball received them as donations.

“I said, ‘There may be no business, but there’s a need, so I’m doing it on my own,’” Kamen said. “Our veterans are great at some things; they’re great at giving – they give their arms, they give their legs, some give their lives. They’re not very good at taking. They don’t even ask for anything. And when they need to get picked up and hauled up a flight of stairs, they’re humiliated. This changes their lives instantly. It’s a smile from ear to ear.”

It’s a trick of modern-day menu design to list every herb and uncommon ingredient to entice customers and mask what might be an otherwise normal meal, but in the case of Robert’s menu, verbal description falls short in conveying the full breadth of what turned out to be a hearty and sumptuous sensory experience.

Defying explanation is a conundrum the organizers of Skyball understand all too well. 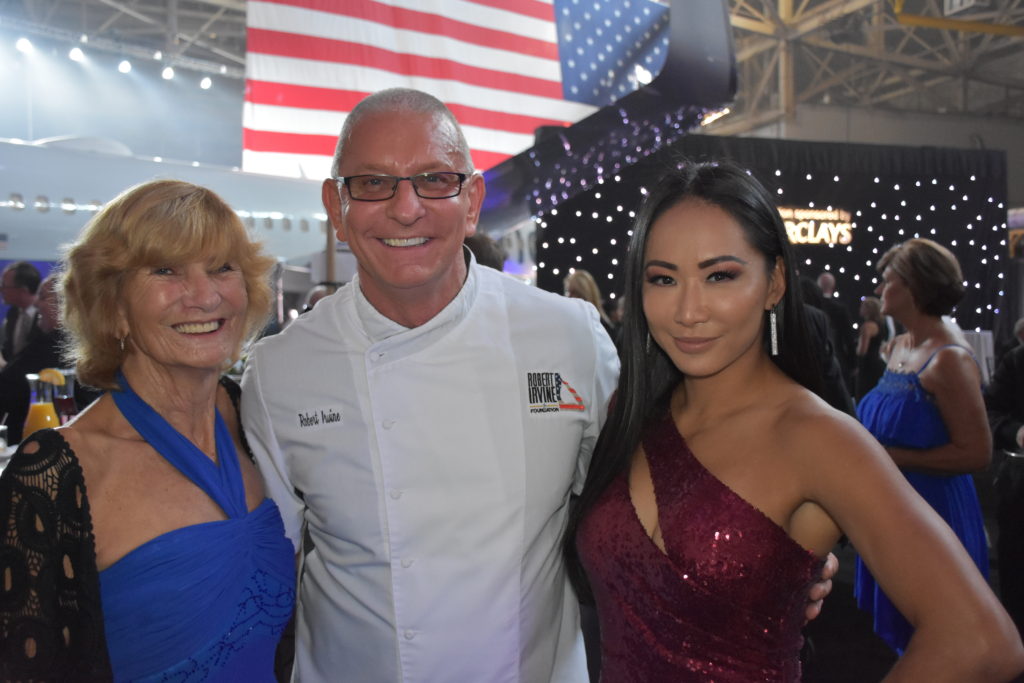 Robert flanked by his mother Pat, and wife Gail at Skyball XVII

“It’s almost impossible to explain to people,” said Chris Singley, Managing Director of Community Relations and Team Member Management for American Airlines. “It’s novel. There’s not an event like this. I can use all the adjectives and even show pictures, but to be here in the space is just a completely different feeling and it’s only then that you can appreciate what this is.”

Singley is responsible for working directly with the Air Power Foundation to help organize every facet of the event from logistics to what kinds of stories will be told through speeches and honorees during the weekend. She heaped praise on the volunteers, without whom the event wouldn’t be possible.

“It truly takes a very large village to pull this off,” Singley said. “There are 1,000 volunteers. There are some fun jobs, and there are some grinding jobs. No one likes setting out 4,000 chairs, but that has to be done. And they’re almost all American Airlines employees. They’ve really adopted this event as their own.”

A few years ago, Singley brought her father, Tim Kelly, a four-year Army veteran to the event. After the Medal of Honor recipients were honored, the emcee asked all veterans to stand and be recognized. Kelly refused to stand. When Singley asked her father why, he said, “I have no business standing in a room like this.”

“He was deeply touched,” Singley said. “Until you’re in the room and read the stories about what these people have done, it’s hard to understand.”

But every year the message spreads a little further, and the amount of money raised grows a little higher. It’s a source of endless pride for all involved—and a real difference-maker in the lives of all veterans who benefit.

To learn more about Skyball or plan your trip to attend next year, visit Skyballinfo.com.

You can read the official American Airlines press release HERE.