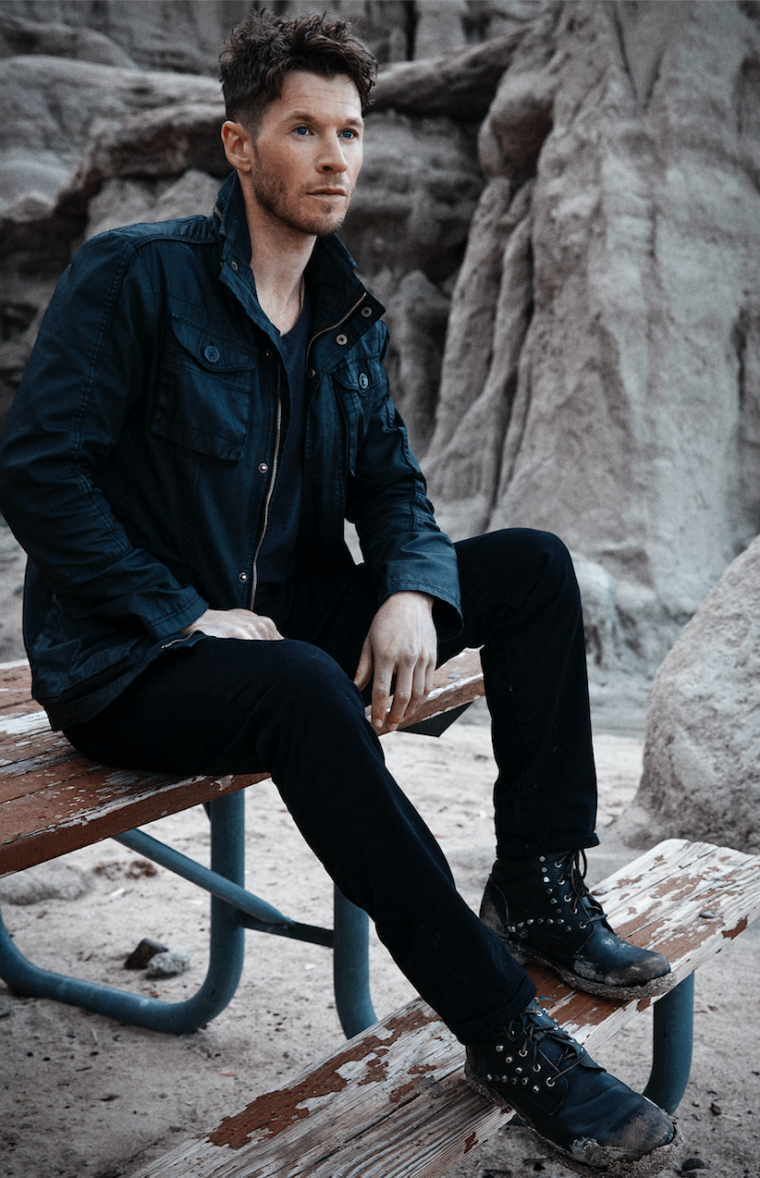 He’s a veteran of action-packed genre fare like the Sniper film series, MacGyver, and NCIS. Now he’s taking the lead role in the latest installment of the blockbuster video game series, Call of Duty: Modern Warfare. Here, Chad Michael Collins dishes on making the new game, designing the life you want, and how to get unstuck.

Robert Irvine Magazine: The new game is called Call of Duty: Modern Warfare, the same name as the original in 2007. There’s no number after this one so is it a remake or is it a reboot where we’re going in some new directions?

Chad Michael Collins: I’ll steal the language of our awesome director Taylor Kurosaki and the people in the marketing division; they’ve been saying it’s a re-imagining. So it’s a reboot in a sense that Modern Warfare 3 back in 2011 ended in a catastrophic nuclear war. There’s really nowhere to go once you kind of start firing the nukes, right? This has got touchstones from old characters but it’s fast forwarded to reflect the moral gray area I suppose of what modern warfare really looks like today.

They tried to give the players and the fans enough touches like famous Captain Price from the old games. I’m sure there’s a lot more references and Easter eggs buried as you play through the story campaign. But it’s telling a story for our modern day, for better or worse, about the way that war is fought. It’s very gray, it’s very morally ambiguous, it’s very clandestine and there is no black and white.

RI: You’ve worked in a lot of different military themed projects including the Sniper film series. Compare the process of getting ready for a movie like that versus the motion capture work you did for this. I would almost imagine that the small details of how you carry a gun and how you move from room to room, they would seem more important to in the video game world because a player can take your body and move you in all directions and everything you do has to be believable. In a film you maybe have some more specific blocking that you’re going through. Do I have that right?

CC: Yeah, you’re pretty on point. They are similar but different. The performance capture process we are being captured by 50-plus cameras every time. There really is an attention to detail on the specifics like you said and it has to be. We still have marks and we still have blocking but movement is really encouraged. Everything needs to feel dynamic just because you are shot and you are seen from every single angle and like you said the player can go any number of places at any time. The stuff that needs to be tactically correct, I think it actually becomes more important in proper filmmaking like a Sniper movie for example.

With Call of Duty: Modern Warfare it’s very important to put a premium on getting that right and because they’re really, you’re being looked at from everywhere. We had Navy SEAL consultants that were unbelievable and extremely helpful in that process helping us all always be aware, take after take if we were getting it right. We all really want to get it right and pay proper respects to our service men and women and the people who are brave enough to suit up.

RI: Now how would you describe the character that you play? Is he a guy who is struggling with this new definition of what war is?

CC: Yeah, my character Alex, he is CIA SAD which is special activities division. He is more of your kind of clandestine rogue operator. He is the guy who will be boots on the ground in very tricky situations.

So he’s the guy that goes in there and infiltrates and embeds himself with our allies, in this case he falls in with a group of freedom fighters in a fictional country called Urzikstan. He works with their guerrilla fighters as they fight a terrorist cell in Urzikstan. Also the country is occupied by Russians, it always has been. He’s navigating the very tricky landscape… He does it from the inside out.

RI: As I look at your IMBD profile and at all the projects you’ve been in, it looks like your career has been built around stuff that you love. It looks to me like you’re chasing stuff that you have fun doing. Lots of genre, military, and now video games.

CC: Yeah, I’m glad you recognize that because for me, my intention as an actor was to have fun. I’ve never been in this to chase trophies and trinkets and stuff to put on the mantle. I’ve been in this to have fun. Fun for me hearkens back to childhood. It’s G.I. Joe, it’s comic books, it’s sci-fi and fantasy and reading The Hobbit and Lord of the Rings and growing up on Star Trek: The Next Generation.

Thats the stuff that’s always been fun for me, the only reason I ever took an acting class on a whim way back in the day is to play that pretend soldier, to be the space cowboy to hopefully be in a Star Wars show or in some kind of a comic book property because it’s the stuff I still love to this day.

Modern Warfare was a dream role because I’ve always been a gamer from the original Nintendo all the way up through high end PC games. I still play to this day so many games, probably too many games. Being able to originate a character in one of the biggest first person shooter franchises on the planet was really, really a dream come true.

RI: Well you certainly look the part and you’re in fantastic shape. What is your training and diet like right now?

CC: It’s really more about what I don’t do perhaps more than what I actually do. People assume that I’m in the gym six days a week. I’m not. I don’t think I can possibly stand that. I just don’t eat pizza. I don’t really have cookies. I don’t have a lot of the fun stuff unfortunately. My philosophy as an actor has always been these are the action roles that I’d love to play. It’s way easier just to stay in shape and continue that momentum than it is to let yourself go and then have to get back in shape.

I suppose that’s kind of like a fighter mentality, boxers and mixed martial artists and athletes in this way, they can never really let themselves go because they’re a day away, a week away, a month away from performing. That’s the approach I’ve always taken, being the paleo diet guy just eating well and doing so consistently and just staying active. I love to play basketball and I play to this day in competitive leagues. I love to box a little bit and I’ll go to the weight room of the gym here and there. It’s mostly staying active, a lot of hiking, things of that nature.

RI: We have so many readers writing in to say they’re stuck in various situations they don’t like: bad jobs, relationships, can’t get going with their fitness goals. Since you’ve achieved success in a very competitive field, what is the best advice you’d give to a stranger who might come up and say, “I feel stuck. How do I get unstuck?”

CC: What I’ve discovered is that people tend to be reactors in life. They kind of let the conditions dictate how they feel on a daily basis. They have kind of an outside-in perspective. If we get rejected for an audition, we take it personally. There’s something wrong with us. Rarely, I think, do you see that person taking an inside-out perspective. By that I mean being clear on who you are, on what you want and then acting accordingly.

Collins as Alex in Call of Duty: Modern Warfare (2019)

I work in an industry where it’s 99% rejection all the time. Being attached to every outcome? That’s a slow death. I am very intentional. I’m very clear on who I am and what I want. It’s a lot easier to just shrug off the no’s; it’s a lot easier to shrug off the rejection knowing that something bigger and better is waiting for you and just kind of holding onto that mission.

RI: Most people don’t understand that about acting, that there’s endless rejection and there’s no avoiding it. Were you always able to separate others’ opinions and not internalize them or take them seriously? Or did you have to work to get there?

CC: I think we all start by bopping around through life and a lot of things don’t work out. If you have the awareness to understand it, then you also understand that you have a choice to do things differently and find things that resonate with you.

RI: Your Twitter feed reflects that. You don’t get involved in other people’s dramas and conversations. You just share what you’re excited about.

CC: I look at social media as a tool. I like to keep it positive. I like to keep it supportive. It’s a wonderful place to interact with fans who are kind enough to spend their time or their money or their energy on watching my projects and I love that back and forth with them. I don’t have time for trolls. I don’t have time for negative people or opinions. It doesn’t interest me. It’s not where I’m going. I feel like in our 20s, we’re all data collecting. Some things work out, some things don’t. The 30s is about using that data, looking at the patterns, seeing what worked and what didn’t.

The answers always pointed back to me. Once you understand that you are the creator of your own reality so to speak without getting too willy-nilly spiritual here, it’s empowering when you take the reins, when you take ownership, you take 100% responsibility for your life. It’s that much easier to create your life rather than just react to everything that’s going on around you.

RI: You’re in a brand-new, big-budget cutting-edge game, but I hear you love retro games and you’re a big comics fan. Name some favorites.

CC: I grew up on a steady diet of mostly Marvel comics. I read all the X-Men, I had all four of the Spider-Man series going back in the 80s and 90s. Image Comics. I loved Spawn and Wildcat and Savage Dragon and all those comics. I’ll still read any and all comics to this day.

Preacher is my all-time favorite. The Boys is a pretty close second. I love Garth Ennis’ work, Warren Ellis, there’s so many great comic book writers I’ve loved over the years and continue to enjoy. In terms of gaming, I still play Warcraft, you know ten plus years running. I’m powering through Warcraft classic right now which is a nostalgic throwback being the OG vanilla version of the game which I love.

I still play a lot of Magic: The Gathering which is a strategy card game I’ve been playing since I was in high school. I’ll go back and play some Contra, some Final Fantasy. You know about every two or three years I go back and repeat Zelda: A Link to the Past for Super Nintendo. I’m pretty open. A game will just strike my fancy and I’ll just power through. I’m just always doing that.