Nothing Can Stop John Peck

He gave his arms, his legs, and his memories for his country. Somehow, he still has more he has to give.

The first explosion should have killed him. It was 2007 and Marine Sgt. John Peck and his unit had just seized a cache of homemade explosives. When Ground Ordinance Disposal arrived to detonate the cache, Peck and company started making their way back to base. Peck manned the machine gun turret on top of the Humvee. As the vehicle rolled along a dirt road, it hit a pressure-triggered IED. The explosion rocked the vehicle and threw Peck up and forward, his head smashing hard into the machine gun.

He stepped down from the turret and wandered the road, conscious but with no idea what was happening. He told his fellow Marines he was looking for his Microsoft Zune.

He laughs about that last detail now. His ability to maintain a sense of humor about his traumatic brain injury and severe memory loss is one of the many things that makes him so remarkable.

But the memory loss he suffered wasn’t temporary and the brain injury was serious—a tear in his frontal lobe that affected short- and long-term memories as well as balance and speech. It took two years of physical therapy for Peck to regain coordination. At the same time, he needed occupational therapy to relearn the basics of his job, like driving. Today, though, he still suffers from memory loss and often struggles to find the right word when he speaks.

By the time he had recovered in 2009, he was eligible for an honorable discharge, but he wanted to re-enlist. Doctors insisted that his time in the military was finished. But where there is a will, there is a way, and I haven’t met many men with a stronger will than John Peck. He begged, pleaded, and essentially argued his way back into service, but his next stint in the Marines didn’t last long.

The second explosion should have killed him, too. On May 24, 2010 while serving in Helmand Province, Afghanistan, Peck was clearing an empty compound, searching for explosives. He was the first man in, using a slow, sweeping arc with his metal detector. His fellow Marines followed close on his heels, stepping only where it was clear. Room by room, Peck gave the OK. He turned to face his sergeant to tell him he was going outside to work security. As he stepped, he touched and IED and the explosion bolted him through the air.

After that, he saw only darkness, but could cry out to his brothers for help. He told them he didn’t want to die. They said he wouldn’t. Then they administered an IV directly into his bone marrow and knocked him out. It’s his last memory for the next two-and-a-half months.

He lost both legs and his right arm that day. Doctors fought to save his left arm, but couldn’t.

Making matters worse, a flesh-eating virus—native to the sands of Afghanistan—tore through what remained of his left leg, his left biceps, and the top layer of his abdominal muscle. He became the third quadruple amputee of the war.

Bear in mind that his mission in Afghanistan that day was community outreach. His unit was meeting with locals to let them know that Americans weren’t to be feared, that they could be called upon for help. In the aftermath, no one could blame Peck if he became bitter or depressed. No one would call him a coward if succumbed to the initial impulse when he woke up, which was to end his life.

But when I met John Peck in 2014 at a benefit for the troops—one of Gary Sinise’s Invincible Spirit Festivals—I met a bright-eyed, funny, and above-all, fantastically driven young man.

He told me that he had always wanted to be a chef. Originally, he had planned to attend the Culinary Institute of America through a program with the Marines as soon as his tour in Afghanistan was finished. After that, he planned to tour France and Italy and learn from world-renowned chefs, return home, compete on The Next Food Network Star, and win. It was a big, audacious goal. As he told me about it, I did my best not to tear up. A dream derailed in service to your country—that is bittersweet, indeed. Perhaps he could see where my mind was going as I curled my lips and gave him a sympathetic look. He had to be used to it at that point because he stopped me immediately, looked into my eyes, and said, “That is STILL my goal.”

His resolve was breathtaking, but it was still difficult for me to reconcile that with his situation. It was a lofty goal to begin with. Now, of course, there were even bigger obstacles in the way. He was in a wheelchair with one ill-suited prosthetic arm.

To pursue this goal seriously, he would need to get mobile and need use of two fully functional hands, which would require a rare and highly risky double-arm transplant.

He knew this, of course, and was patiently waiting for his chance. In October of 2016 he got the call that his donor arms had come through. After a marathon 13-hour surgery, the transplant was complete. Peck then underwent more grueling physical therapy as his nerves slowly and painfully grew into his new arms. The nerves grow at the rate of one millimeter a day, or about one centimeter a week. That’s one inch per month. There’s also this grim fact hanging over him: Even now, almost four years later, his body could reject his arms at any minute and he could lose them, sending him right back to square one. 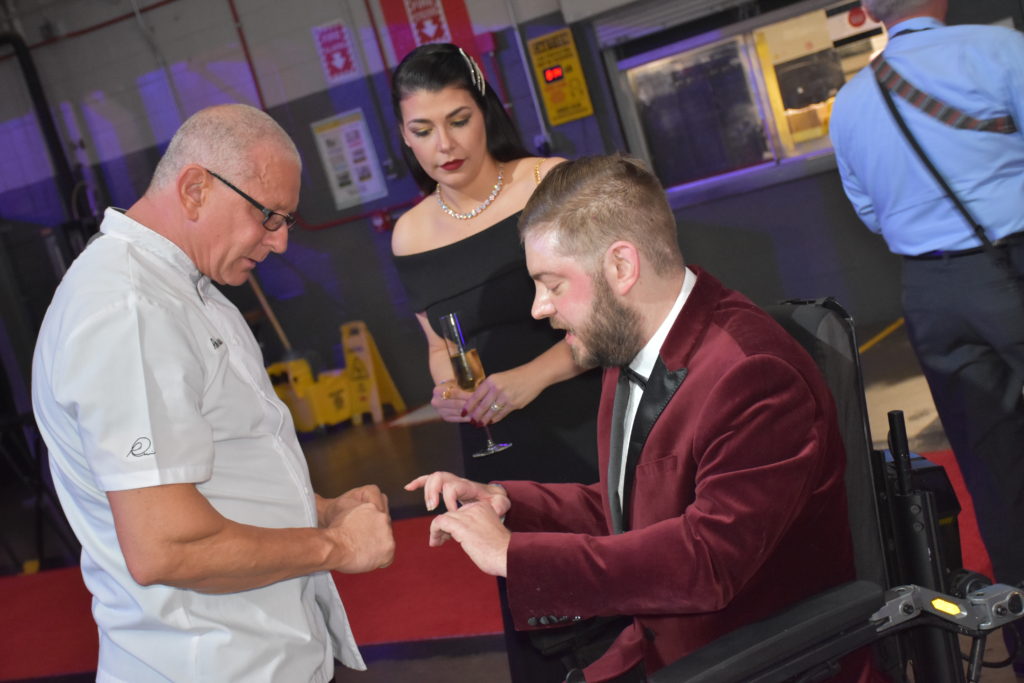 Peck shows Robert his new hands while his wife Jessica looks on at SkyBall XVII in 2019. After receiving the arm transplant, nerves grew into his new arms at a rate of one millimeter per day.

He is undeterred, and his spirit carries him through the days. That spirit is infectious. In February 2016 he found Jessica Parker on Match.com. She didn’t care about his disabilities, only his unbreakable will and sense of humor (his profile outlined his injuries and said he’s a “blast” to be around). Today, they are married.

Whenever I have a day that I think is tough, or I look back on any of the hard moments of my life, I try to think of John and he instantly brings the whole world into perspective.

I am floored not just his incredible strength and positive attitude, but by his generosity. Remember: He had to fight tooth and nail to go back to war when he had already given so much.

There is generosity in the common sense which I believe most of us understand—I give you the extra that I’m not going to use—and then there is generosity that gives of your deepest self, the kind that John Peck showed. He gave his arms, legs and even his memories for his country.

As this issue of Robert Irvine Magazine heads to publication, John is trying to schedule a trip to the Culinary Institute of America to see if he’ll be able to attend classes this fall. I don’t know if John will ever reach his goal, but I’ll be rooting for him every step of the way.

And I hope he knows that by even getting back up and trying, he’s given this nation yet another gift: inspiration, hope, and perspective.

His biography, Rebuilding Sgt. Peck: How I Put Body and Soul Back Together After Afghanistan is available HERE.