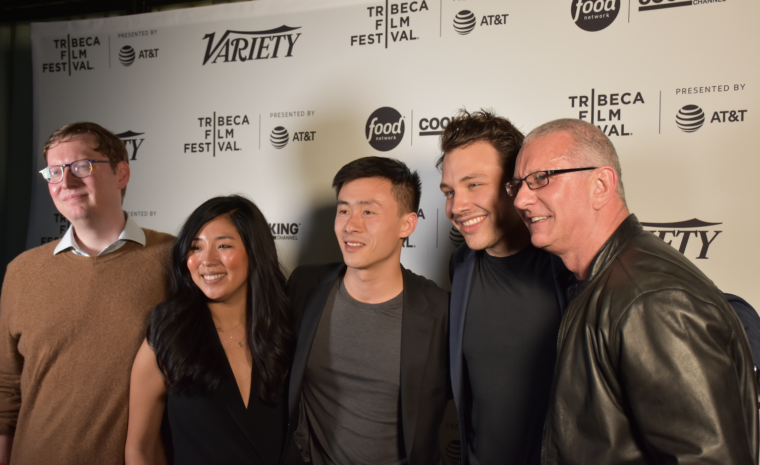 A Food Network and Variety Magazine panel hosts Robert with three indie filmmakers to talk all about food on the silver screen.

Since 2002, the Tribeca Film Festival has showcased a diverse and deep selection of features, documentaries, and shorts. For the 2019 festival, which ran from April 24 to May 5, festival organizers received over 9,000 submissions, from which they culled a selection of about 200 across all categories. It’s a testament to the strength and vitality of the festival, which was created by Robert DeNiro and Jane Rosenthal, in part, to help revitalize downtown Manhattan after 9-11.

Panel discussions are a hallmark of the festival, and this year, at a panel entitled “Film to Table,” Robert appeared alongside filmmakers Mike Lei, Ben Proudfoot, and Abby Davis. Co-presented by Variety Magazine and Food Network, and hosted by Variety Executive Editor Brent Lang, the conversation focused on food in film.

Robert kicked off the discussion by citing one of his favorite depictions of food in film in the 2007 Pixar animated feature, Ratatouille.

“That movie gets so much right about food,” Robert said of the film, which centered on a rat who dreamed of being a chef. “Food is culture, and anybody can cook. That is the beauty of it.”
Robert also complimented the Showtime series Billions for not just showcasing so many New York City culinary landmarks, but for using food in a huge number of scenes and using food choices—and the way different characters eat—to reveal character.

Proudfoot, the founder and CEO of Breakwater Studios, was at the festival to premiere That’s My Jazz, which tells the story of Milt Abel II, who is considered to be one of the best young pastry chefs in the world. The son of a jazz legend, Abel II is the head pastry chef at Thomas Keller’s The French Laundry and Per Se. Proudfoot said he learned while making his film that the same part of the brain interprets food and music, and that in this case, there was a deeper connection between father and son than many people might realize.

“It was an honor to have That’s My Jazz premiere at The Tribeca Film Festival,” Proudfoot said afterward. “This was our first time here, and it was such a treat. I especially enjoyed sitting down with a powerhouse like Robert to discuss the fascinating intersection of cuisine and cinema. Both disciplines have a similar goal—to communicate the artist’s heart, whether it’s a chef or a director—to an audience.”

Lei was at Tribeca to premiere his documentary feature A Taste of Sky (with Davis producing), which centers on the journey of two students through Gustu, a fine-dining restaurant and culinary school for the impoverished youth of La Paz, Bolivia. His film, and what he and Davis brought to the panel, focused on food’s ability to not just entertain, but to transform lives for the better.

“The wonderful conversation with Robert and our other panelists reminded me of the true beauty of gastronomy: its ability to excite, inspire, and unite,” Lei said after the panel. “Robert’s love for food was so infectious and I was reminded that in our films we shouldn’t strive to just show the craft of the kitchen, but also the enjoyment and pleasure of it. Coming away from the evening I was inspired in all future cinematic representations of food to not only demonstrate the artistry behind the creation of a meal—we see plenty of that already—but also to show how exciting and joyful it is to share a meal with the ones that you love.”
It was Robert’s first sojourn through the film festival, but he said the experience was a terrific one and that he’d be happy to return.

“I loved sitting with Mike, Ben, and Abby and talking about how food and film inspire us,” Robert said. “And there was so much more to talk about! We didn’t even get to chat about Monsieur Creosote in Monty Python’s The Meaning of Life. Now that’s a timeless scene in the history of food in film. And a great sendup of how the culinary world can sometimes take itself a bit too seriously. There’s art to it, certainly. But ultimately, all of this should be fun.”

Learn more about Mike Lei’s A Taste of Sky HERE.