ROBERT IRVINE MAGAZINE: Your first book, School of Greatness, is universally loved by men and women. Your new book is targeted directly at men. What was it specifically about the state of manhood today that made you want to write The Mask of Masculinity?
LEWIS HOWES: This book is driven by my own life and experiences of struggling to understand what masculinity truly means. I was raised in a traditional Midwestern home, played sports my whole life, achieved business success and yet still found myself struggling to handle my emotions and relationships as an adult. I started researching this topic to help myself – and any other men in the same situation.

RI: We see negative stories every day about the state of manhood: more and more young men are spending untold hours playing video games instead of being creative and productive; pornography has replaced relationships for many. An old professor of mine once called this tandem “make-believe” or “virtual manhood”. Do you see the proliferation of these mediums as a major threat to manhood? Does your book address the issue?
LH: After doing all the research and interviewing countless men and women about their observations about masculinity today, I identified nine “masks” that men wear to protect themselves emotionally. Each of these masks acts as a “virtual” way to experience life as a man while still protecting his heart and true identity. For example, one of these is the Joker Mask – men who turn everything into a joke to protect themselves from intimacy or responsibility. The cost is that their relationships are shallow, people don’t take them seriously, and they are ultimately very lonely. The book addresses how to take off each of these masks so that true connection and love can come back into a man’s life. 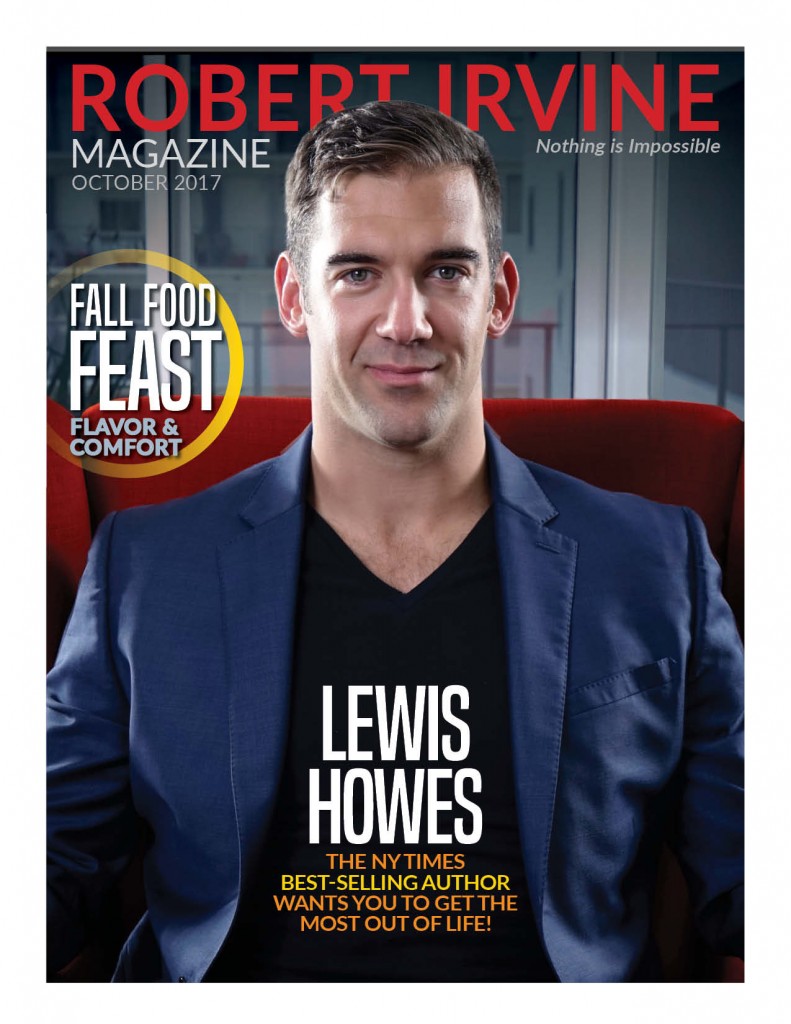 Lewis on the cover of our October 2017 edition.

RI: What can women get out of your new book?
LH: I am really excited for women to read this book because the stories that men share in it—myself included—are very real and raw. My hope is that it will be an eye-opener to women so that they can better understand where the men in their lives are coming from. I also include a section in each chapter to suggest how women can support the men in their lives in taking off their masks.

RI: You said you envisioned dancing with Ellen on her show. I’m very interested in that because what kind of plan can you make for a goal that doesn’t really have a clear plan? You talk about emulating others who have done what you want to do. But becoming a guest on Ellen and dancing with her – is there a roadmap for that? Do you need one?
LH: The power of visualization is something that I strongly believe in and it does have a spiritual side to it. I started visualizing athletic goals I wanted to achieve as a student and experienced achieving those exact goals in sports I played. I’ve learned visualization isn’t so much about planning out what is going to happen but about cultivating a belief in myself that I am capable of making it happen.

RI: What are your personal goals for the future? You’ve mastered salsa dancing. What’s next on your list?
LH: I want to impact 100 million people to create a life and business around doing what they love. All my projects and products are contributing to that goal. I also want to become the number one daytime TV talk show host – with the same end goal in mind.

RI: What is your next major career goal?
LH: I’ve got several projects in the works, but that vision is still guiding me to create a massive self-development brand that will reach far beyond what the School of Greatness is right now.

RI: Do you believe there is a symbiotic relationship between personal goals and professional ones? To use you as an example, did mastering salsa dancing embolden you to attack bigger professional goals?
LH: There absolutely is. Every good habit I have in business comes from my sports training. I have gotten myself to do a ton of things that scared me in business (like public speaking) because I started the habit of pushing myself early on. Even as a teenager, I made myself talk to every pretty girl I saw just to develop the habit of gaining confidence.

RI: You’re open that you were sexually abused as a child. For many victims, this can be a defining moment of their lives, and understandably so. But you refused to let it define you, using athletics as an outlet. (MLB pitcher RA Dickey is another notable example of this phenomenon. Louise Hay is an amazing example within the self-help community.) How did you avoid the trap of adopting a victim mentality? Do you believe you had an innate drive to succeed regardless of the childhood tragedies that surrounded you? Or did you use tragedy as fuel?
LH: Honestly, being sexually abused DID hold me back for a long time emotionally. I was able to create physical results using my anger from being abused as fuel, but I was empty inside after every major achievement. It wasn’t until I faced the source of my anger that I really started to heal and achieve the kinds of fulfilling results that drive me now. 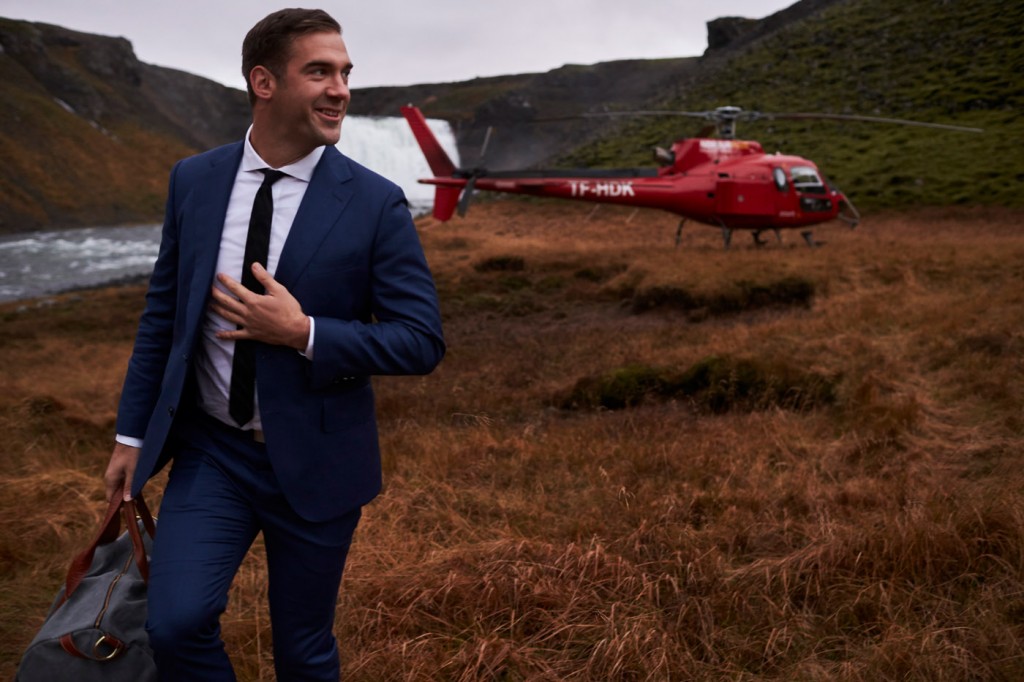 RI: When your athletics career ended, you say that you lost your identity. I’ve been jobless for a time, and I think especially for a man, it’s humiliating. With every moment that goes by and you’re unemployed, you lose more of your sense of self-worth. Reversing negative momentum – in your career and in fitness – is a tremendous amount of work. As you started to climb out and use LinkedIn, did you set “mini” daily goals for yourself? Or was it more of an organic kind of poking around and that just snowballed?
LH: I’m one of those all-or-nothing guys, so when I started getting into LinkedIn, I went all in. I spent at least 8 hours a day on it, learning everything I could, making connections, and adding value. I didn’t have anything else to do, so I hyper-focused on it. I didn’t have a plan, but I saw potential.

RI: If you lost everything today (say an unforeseen catastrophe wiped out your business) what would you do? Better yet, what advice would you go back and give yourself on your sister’s couch? It’s inconceivable that today’s version of Lewis Howes would spend a lot of time wondering what to do – you’d probably jump right up and act on something new.
LH: I’d do what I’m doing now, but I’d know how to start it better. Relationships are everything, so I’d leverage my relationships immediately and add massive value to everyone around me. That’s what opens doors. I’d tell my on-the-couch self to be kind to myself and believe that I had value to give.

RI: Is there one – or several – unifying characteristics of the people you’ve had on The School of Greatness? Because it’s not just success – there’s an incredibly positive vibe that emanates from each person you interview. Do you look for a combination of success and positivity before having someone on the show?
LH: I am much more interested in the character someone has built than the results they’ve created in their lives. I always look for people with great energy, who are service-minded, and who have created extraordinary results. I’ve learned it’s important to invite people on the show who are willing to be vulnerable as well. That’s when the best stories come up.

RI: Do you have a single-favorite guest on the show? From the outside I might guess that it’s Tony Robbins; you two share a real kinship.
LH: Tony is amazing. He’s a big role model of mine. I also really love Rob Dyrdek and Sara Blakely.
RI: Name three guests you’d love to have on the show but haven’t yet and why.
LH: The Rock; I’m working on it from several angles. Jim Carey; still working on getting the right connection. Jerry Seinfeld; still working on getting the right connection.

RI: Parting thoughts: Any advice for the readers who are stuck and can’t lose weight. It’s the number one issue people ask us about.
LH: Check out this EPISODE I did with Chris & Heidi Powell, the fitness trainers from Extreme Weight Loss. They have incredible energy and insight into what actually makes the difference when losing weight. It’s all about the promises you make and keep to yourself.