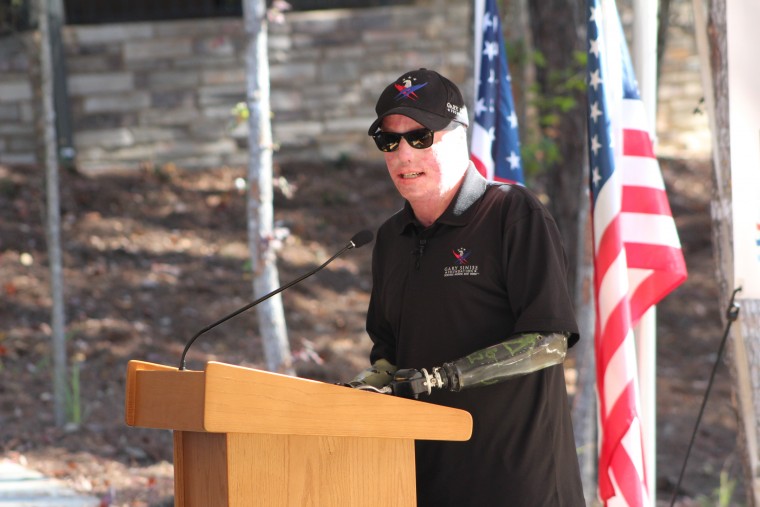 Gravely wounded in an IED attack, US Army SFC Michael Schlitz suffered burns on 85% of his body, lost both arms below the elbow, and flat lined 10 times in the ensuing months. His survival is nothing short of a miracle, but the road to recovery was paved with an almost unfathomable 91 surgeries and counting. Today, as an ambassador for the Gary Sinise Foundation, his mission is to let other wounded veterans know that they don’t have to fight alone.

By Matt Tuthill /// Photo Courtesy of the Gary Sinise Foundation

Editor’s Note: This is Part I of a two-part feature. Check back for the December issue of Robert Irvine Magazine for Part II.

February 27, 2007 began just like any other for Army Ranger Michael Schlitz. He woke in the predawn hours and gathered his patrol to go over their mission for the day. If all went according to plan, they’d be out on the Iraqi roads for the next 15 hours, performing the plodding but crucial task of bomb disposal.

It was the height of the surge and Schlitz had just gotten his wish; he joined the Army in 1996 and had been eager to deploy since Sept. 11, 2001. In 2006, the 10th Mountain Division from New York finally got the call.

In the early days of the war, the number of KIAs on the American side was relatively low, but as the insurgency grew and the enemy learned to plan their attacks, casualties spiked, resulting in the surge, in which the US tripled its number of boots on the ground. The main culprit in the rise of combat deaths were IEDs, or improvised explosive devices, scattered on roads throughout the country.

Schlitz’s company used powerful metal detectors and a convoy of armored vehicles to find and disarm these bombs. The most important vehicle in this convoy is the monstrous “buffalo” a truck so enormous and heavily armored, “you could detonate a 500-pound bomb underneath it and it would still run,” Schlitz says.

In the course of bomb disposal work, IEDs often exploded underneath or near a buffalo—two or three times per day, in some instances. Even after a beating like this, the vehicle was able to roll on with its occupants safely inside. However, repairing these vehicles and turning them around for another day in the field was terribly slow going.

On this particular day, Schlitz’s patrol was short of armored vehicles. “My solution to that was to replace one of the heavily armored vehicles with a Humvee,” Schlitz says. “You have a job that needs to get done no matter what. It’s the call you have to make.”

Two-and-a-half hours into the mission, Schlitz’s convoy had just finished clearing a dead end street. The convoy slowly made its about-face, with Schlitz riding in the Humvee bringing up the rear. Unbeknownst to him, the convoy was rolling over a deep-buried IED—constructed from two artillery shells and a propane tank—not picked up by their metal detectors.

“We were near a culvert,” or underground drainpipe, Schlitz says. “Sometimes they put them near those because to our equipment it might just look like part of the culvert.”

Enemy spotters, knowing that IEDs had little effect on the buffalo, waited until Schlitz’s Humvee was over the device and then detonated it. The explosion rocked the Humvee, sending shrapnel flying through the interior and spraying everything in range with propane. Two of the occupants were killed instantly, and a third burned to death inside the vehicle. Schlitz was thrown from the Humvee when the door on his side blew open.

He looked up from the road to see the damage. Instinct told him to run to help his friends, and that’s exactly what he did. It all happened too fast for him to know that his uniform was on fire; when he ran to the vehicle, oxygen fed the flame and his body was engulfed.

“As I got close to the Humvee, that’s when I felt the flames hit me in the face,” Schlitz says. “I dropped my body armor real quick, got down on the ground, and started to roll. The heat was just so intense that my muscles basically locked up. Any time you have an accelerant, whether it’s gas, diesel, propane, when you roll that fire gets put out. But as you continue to roll, the area that just went out reignites. It would reignite every time I rolled and eventually I just locked up and was face down in the dirt.”

Incredibly, and perhaps unfortunately, Schlitz didn’t go into shock, and can remember his thought process during those agonizing moments.

“Everybody has a different experience with what crosses their mind at the very end,” he says. “You know, the-light-flashes-in-front-of-you kind of scenario. For me, I knew: ‘I’m face down in the ground burning alive, and I’m going to die right here in Iraq. This is it for me.’ The heat and the extreme pain I was in from being on fire was just so excruciating that I didn’t see a way out of it. I could hear my guys yelling for me, and it gave me a little bit of hope, but at the same time I didn’t know how far away they were. I didn’t know what they could do for me.”

When his squad mates hit him with the fire extinguisher, Schlitz describes the pain relief as instantaneous and that his body was overwhelmed with a cooling sensation.

“The second part of it was emotional, you know, I went from ‘Here I’m going to die face down in the ground of Iraq’ to “Alright, my guys are here, they’re here to help me,’” he says. “I thought maybe I’m not going to die here.”

But Schlitz’s ordeal was just beginning. The medic for his unit had just died moments ago in the explosion. The remaining soldiers then faced a decision on how to move him. Some wanted to pick him up immediately and get him off the road, fearing it might be an ambush. One soldier, however, demanded they get the spine board and transport him properly. It was a decision that saved Schlitz’s life.

To describe his condition at the time—and why the decision to get the spine board was so crucial—Schlitz uses a gruesome analogy.

“If you think about baked chicken,” he says, “if you pull it out of the oven, the skin and meat just fall off the bone. That’s the condition I was in, so had they dragged me off the ground, they would have killed me. This young sergeant—who I actually had taken some disciplinary actions against in the past—made the call to stop them from dragging me and to put me on the spine board.”

Once Schlitz was on the spine board, his unit sheltered in place to protect him until a helicopter came for extraction. On board, a medic asked him his name and social. “I think I got it out,” he says, “but then they hit me with the morphine, and that’s my last real memory for four months.”

Later that day on an operating table in Baghdad, Schlitz flat lined three times. He was then flown to Landstuhl, Germany for more operations. Again, he kept flat lining and doctors kept reviving him. When he was finally stable enough to make the journey, he was flown back to the US to Brooke Army Medical Center in San Antonio. More surgeries, and flat lining, followed. From the first day in Baghad through his months in the hospital, Schlitz flat lined a total of 10 times.

His recollection of his time in ICU is hazy. He knows that family came to visit him and can recall being in the room but not in his body—and seeing family members who weren’t actually there. Another scene he can’t remember: with his mother Robbi doting at his bedside, he told her to quickly get his brother because it was time for him to go and hang out with his dad, a Navy veteran who died in 1996. His mother refused, telling him he was still needed here.

“These are things that obviously make me reflect on my faith,” he says.
But during his 10-month stay in the hospital Schlitz found that the psychological damage was as bad as any of his physical wounds.

People couldn’t help but stare at his injuries, which had cost him both arms below the elbows, scarred his entire body, disfigured his face, and left him, essentially, with no nose. Doctors told him not to look in the mirror during his stay and to instead concentrate on rehab. But the pain was intense and he began to suffer from a condition called heterotopic ossification, or HO, a calcium buildup in the joints which affects burn victims and severely limits their range of motion. He frequently thought of suicide.

“I really struggled before I got my prosthetic arms,” Schlitz says. “I was head to toe in bandages early on. I had no hands, I could barely see. I was 100% completely dependent on somebody else. That’s not a life that anybody wants to live, you know what I mean? Your quality of life at that point, no matter how much people are trying to make it good, isn’t good.”

What hardened his resolve to live, however, was constant support.

“There were a few things that brought me out of it,” Schlitz says. “The first one is my family and my community. Mom was there from the get-go. My brother was there for the first six months. I had my Ranger buddies and other guys from the 10th Mountain Division visiting me in the hospital. I was never really alone. I was never isolated. Had my mother not been there, had my comrades not been there, it would have been a very different story.”

“The Rangers—and the Army in general—we had this thing: you never give up, you never quit, you always push forward,” he says. “These things are always drilled. You’ve got to do that in life, as well.”

When he finally got his prosthetics and could feed himself, he felt a huge leap of independence and saw “light at the end of the tunnel” and a future where he wouldn’t be completely dependent on his mother.

But prosthetics were just the beginning. When the Gary Sinise Foundation heard about Schlitz’s story, he became eligible for a custom-built smart home through the organization’s R.I.S.E. (Restoring Independence Supporting Empowerment) program. Schlitz now lives with his mother in a beautiful new home in Georgia that is specially equipped for his limitations. The conventional versions of everyday objects like light switches, shades, and thermostats make for significant hurdles when you’re using prosthetic hands. That’s why Schlitz’s smart home is equipped with an iPad that remote controls virtually all electronics in the house. Because of Georgia’s high humidity, the house was built with a self-dehumidifier that drains into the back yard. Schlitz also has trouble bending over, so electronic outlets are raised higher than normal. Instead of knobs, each door has an easy-to-pull lever.

“The whole house is set up so that I can do everything whether my prosthetics are on or off,” he says.
Since regaining his independence, Schlitz has found a new mission: Stemming the epidemic of veteran suicide. He now works as an ambassador for the Gary Sinise Foundation to speak to the plight of veterans whose wounds are both obvious and invisible. His mother’s declaration that he is still needed here on Earth has proven correct: His new mission is arguably much more important than any he performed in the warzone.