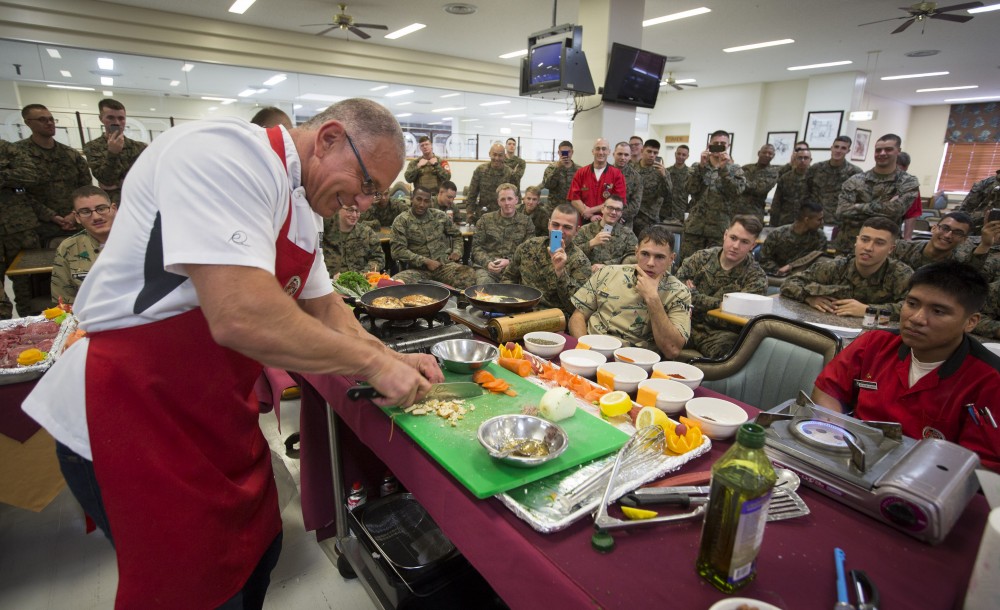 GAITHERSBURG, Md., September 19, 2016 /3BL Media/ — Sodexo, world leader in Quality of Life Services, and Chef Robert Irvine, a celebrated culinary professional, television host and restaurateur, have joined forces to make a positive impact on the health and wellness of the people Sodexo Government serves daily in military communities across the United States.

The exclusive 10-year partnership will allow Sodexo, the largest federal food service contractor in the North America, to leverage two of Chef Irvine’s biggest passions – supporting the dedicated men and women who bravely serve our country and creating nutritious meals that satisfy guests and help them maintain healthy, active lifestyles. It is a dedication to nutrition, health and well-being that is perfectly aligned with Sodexo commitments in all of its business segments.

“I am incredibly excited about this new partnership with Sodexo,” said Irvine. “Sodexo and I share the same view that health and wellness are paramount to our armed forces, and we both share the same desire to improve the quality of life for our military and their families.”

Sodexo believes that health and wellness are key contributing factors to Quality of Life and the company creates its foodservice programs around those concepts.  Therefore, all of the offers Sodexo Government develops specifically for the military are built upon a strong wellness foundation.

“Sodexo Government serves more than 45.6 million meals annually and considers the health and wellbeing of our servicemen and women a matter of military readiness.  For that reason, we have long been focused on providing healthy and nutritious meals to the people we serve at military locations throughout the country,” says Dave Scanlan, CEO, Sodexo Government for North America. “Chef Robert Irvine shares that understanding and has a deep-rooted love for the military, so this partnership is a natural fit and one that will benefit those we serve for years to come.”

Sodexo’s companywide focus on health, wellness and Quality of Life is integral to its business.  In addition to its obligation to the military, Sodexo made a commitment to the Partnership for a Healthier America in 2014 to engage and motivate consumers to help make the healthy choice the easy choice through innovative wellness programs.

Sodexo delivers more than 100 services across North America that enhance organizational performance, contribute to local communities and improve quality of life. The Fortune Global 500 company is a leader in delivering sustainable, integrated facilities management, and foodservice operations.  Sodexo Government provides services that enhance the Quality of Life to those who serve our country at 150 military and U.S. Federal Government locations in 26 states, including serving more than 125,000 meals daily. Both Sodexo and its Government segment are headquartered in the Washington, D.C. area.

Learn more about Sodexo at its corporate blog, Sodexo Insights.

As the host of one of the Food Network’s highest rated shows, Restaurant: Impossible, Irvine saves struggling restaurants across America by assessing and overhauling the restaurant’s weakest spots. Irvine was previously the host of Food Network’s Dinner: Impossible and Worst Cooks in America, has authored two cookbooks, Mission: Cook! and Impossible to Easy, and one healthy living book, Fit Fuel: A Chef’s Guide to Eating Well and Living Your Best Life. In 2015, Irvine launched Robert Irvine Foods, a company that features a nutritionally improved line of food products without compromising great taste.  Irvine recently established the eponymously named non-profit organization, The Robert Irvine Foundation, in an effort to support military personnel and their families.  Now in operation for a few years, the foundation continues to grow and assist those in need.  In recent years he was honored with two very distinguished recognitions for his dedication to the armed services and our country’s heroes.  He was first designated Honorary Chief Petty Officer by the U.S. Navy, and later that year awarded the Bob Hope Award for Excellence in Entertainment and Support of our Service Members – bestowed upon him by the Congressional Medal of Honor Society. For more information on Chef Robert Irvine, visit www.ChefIrvine.com.