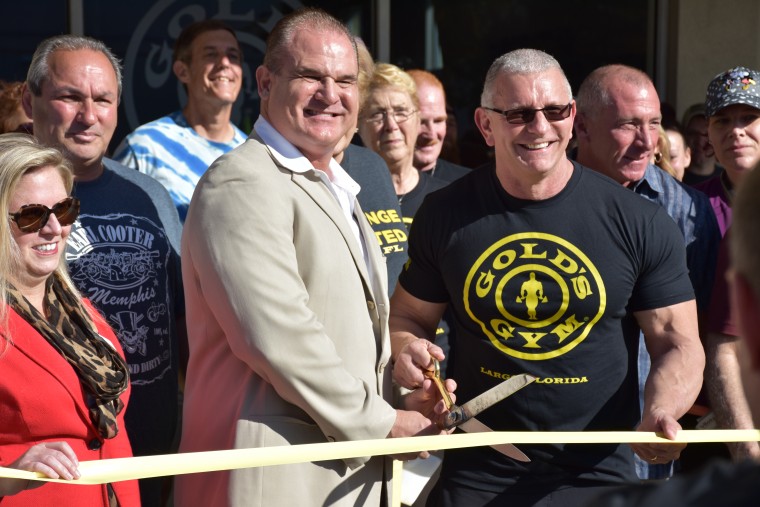 Before a crowd of eager fitness enthusiasts and fans, Robert Irvine hosted the grand opening of his first gym, a Gold’s Gym franchise in Largo, FL, on Saturday, January 14. Alongside partner Ed Bogacki, Irvine cut the ribbon on the 18,000-square-foot facility, which boasts a full complement of programs and amenities for members of all ages.

Gold’s Gym made its name during the Golden Age of Bodybuilding when Arnold Schwarzenegger and his contemporaries trained regularly at Joe Gold’s original location in Venice, CA. Since that time, the Gold’s name has been synonymous with bodybuilding, but the new facility in Largo is reflective of the evolution the company has made over the years.

In addition to a large open-space free weight training area and a huge assortment of the latest cardio machines, the Largo Gold’s location has a functional training area on artificial turf outfitted with kettlebells, weight sleds, and battle ropes, a suspension training area, cycling studio, a childcare center packed with activities, plus a large group fitness studio that hosts all manner of classes, including offerings from Les Mills.

The grand opening ceremonies included outdoor group fitness classes, a 22 Pushup Challenge led by Robert that included a number of local veterans, and a blood drive which Robert participated in. Valor Service Dogs, an organization which trains dogs to support veterans with PTSD, also made an appearance to raise awareness for their cause. Just a few weeks ago the Robert Irvine Foundation awarded Valor with a $20,000 grant. The parking lot was filled with vendors providing food, including Outback Steakhouse and FitCrunch protein bars, plus a local bulldog rescue and a bouncy house for young children.

Bogacki also owns the Gold’s Gym in Tampa, FL, and met Robert when he came to train in that location. For the past two years, they’ve been looking for a place where they could partner on a new franchise and finally found the space in Largo.

“Gold’s Gym, for the second year running, has won the JD Power Award for customer service,” Bogacki said. “We’ll be keeping that tradition alive. It’s very rewarding to see all the hard work that the staff has put into this place come together today.”

At the height of the day, the gym was teeming with new members, many of whom came to meet Robert and get signed copies of his book, Fit Fuel.

“I always say nothing is impossible,” Robert told the crowd during a speech to commemorate the new gym. “That is true of anything you want to accomplish, and it is especially true of health and fitness. It is my hope that this gym, and everything it has to offer, will give you the tools you need to take control of your health and fitness and get everything you want out of life.”