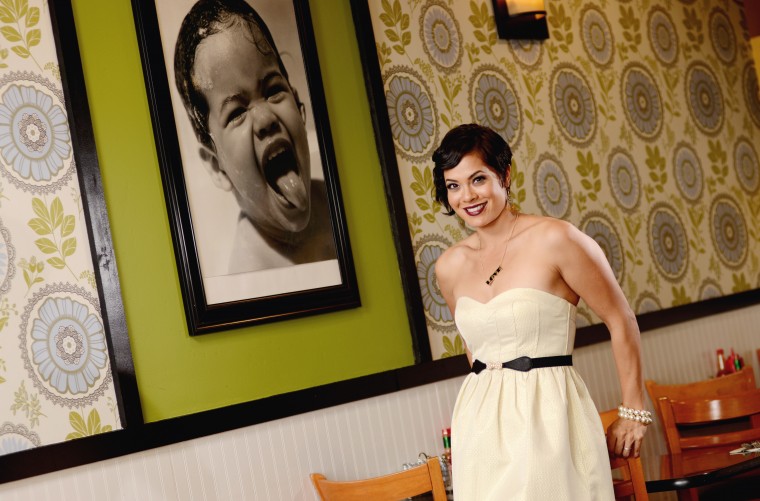 Saddled with a massive amount of debt, The Trails restaurant had a menu too cheap to get back into the black, and owner Stacey Poon-Kinney was on the verge of closing. Then Restaurant: Impossible showed up. By working with a talented staff already in place, Robert was able to help The Trails make several key adjustments to steer things back in the right direction.

The Trails wasn’t the first restaurant to have some good food, a clean kitchen, quality service, and still find itself deep in the red. When Stacey Poon-Kinney and her father Larry Poon bought the San Diego restaurant that she would turn into the Trails, they didn’t know that the price they paid, $225,000, was far too much. When Robert arrived to film this episode of Restaurant: Impossible, he was blown away by the cost, estimating the price of the kitchen equipment, plates, utensils, etc., to be worth only $20,000.

“It’s not like buying a doctor’s office where you’re buying a patient list,” Robert told her. “This is a restaurant, a transient business.”

Not just a transient business, but Stacey and her father only leased their space, they didn’t own it. On top of that, the original floor plan had just 38 seats. After an expansion to 83 seats, which cost an additional $275,000, Stacey says, “We just weren’t getting the volume we needed to keep up with our new costs.” Add to the debt another $100,000 to keep up with payroll, and the restaurant was a full $600,000 in the hole, losing an additional $5,000 per month.

“I can see the tears behind your smiles,” Robert said.

Two days and $10,000 later, Stacey and her father got the patented R:I storybook ending. But six years later, did that ending stick? We investigate…

One of Poon-Kinney’s customers, a retired PR professional, suggested they go on Restaurant: Impossible simply as a PR stunt. The customer had no idea that The Trails was actually failing. So when Poon-Kinney got the note—an ad from a newspaper calling for failing restaurants to apply to the show, which was scouting locations for its second season—she set it aside to think about.

At that point in December of 2010, the idea of a reality show actually being able to save the restaurant seemed like a moonshot. Stacey had fallen on some very hard times.

“I had gone months without paying myself, I had a brand new baby, I had my power shut off,” Stacey says. “I had a one-year-old and a five-year-old at home, it’s Christmastime, and I couldn’t buy them anything; we had Christmas because of the good grace of other people.”

After talking it over with her father, she decided to apply. Producers called her up to get see if The Trails, which was hemorrhaging money, would make it to July when they could start filming. It would mean incurring more losses, but she and her father decided to stick it out.

The first thing Robert took issue with was pricing. The Trails was serving up some very good, home-cooked breakfast and lunch items, but charging far too little. Stacey had considered food costs and labor when making prices, but hadn’t built in much of the rest of her overhead. Besides pointing out that The Trails needed a significant price hike to its menu, Robert also demanded that dinner service be added.

Stacey had previously tried to have dinner service, but failed.

“We had a diner feel for breakfast and lunch and for dinner we were trying to do fine diner,” she says. “It just confused people.”

Robert, though, saw that the chef, Lisa, was capable of running a very good dinner service. He coached her up on how to create some new menu items, including a roasted tomato cous-cous, and ginger-tomato soup and grilled cheese combo, which remain on the menu as of this writing.

As for the space itself, Robert’s designer, Taniya Nayak helped transform a room which was bright and welcoming, but lacked a memorable pop of color and design. She added family portraits and splashes of bright green and mustard yellow paint that stood out in a surprisingly effective way.

“I was standing out back getting mic’d to see the restaurant for the first time and I see these painters come out with this paint and it looks so garish in the buckets, and I said, ‘Oh, I hope that’s not what they used,’” Stacey recalls. “When I walked in it couldn’t have been better. Those were the colors but it was beautiful. I was so happy with how the space reflected my personal style. Taniya did a magical job.

Builder Tom Bury knocked down a room divider (he was forced to when Robert, unprompted, went after it with a sledgehammer) and added simple planter boxes with white birch branches that reached up to the ceiling. It helped add a cozy, contained feeling, yet kept the room open.

While filming, Robert and Stacey went on a local radio show to promote the grand reopening. Normally, the massive influx of business doesn’t happen until the show aired on Food Network, but in Stacey’s case, the boom was immediate.

“We weren’t staffed for dinner and we got very busy, so everyone was running in 18 hour-shifts,” Stacey says. “I had to hire an additional 13 people.”

But the proof is always in the long-term effects, and there might not be a more dramatic turnaround than the one that happened at The Trails. Gross revenue in 2010 was $400,000. In 2016, it was $1.3 million, a staggering, more than three-fold increase in business. Because of reruns, customers still come in from all over the country, wanting to see the transformation for themselves.

Stacey’s debt to her father has been worked down considerably, and they’re on a comfortable course to repay the debt in full, making large monthly payments. The electricity in the Poon-Kinney house is also back on and Stacey and her family have been able to get away on vacation a few times, an unthinkable proposition just a few short years ago. Stacey has also been able to delegate more, and was able to drop her hours, which sometimes hit 100 per week, down to the 40-65 range.

Stacey also has a budding TV career thanks to appearing on R:I, as well as a 50th episode follow-up special. A local producer contacted her to host a pilot for a food-themed show, and Stacey auditioned for and was accepted to the 9th season of Next Food Network Star. She made it to the very end, the last contestant eliminated before pilots were filmed. She was undeterred, filming frequently for local TV. At this moment, though, she says her primary focus is on her family and the restaurant.

This year, however, will present some unique challenges for The Trails. Just last year, when the state of California raised the minimum wage by $1.50, dinner service only broke even. Minimum wage went up another dollar on January 1, 2017, putting Stacey in an incredibly tough position.

“That’s a $2.50 increase per worker, per hour, in a single calendar year,” Stacey says. “And we pay taxes on all of that. That moves dinner into an unprofitable area. People are on tight budgets. There’s only so much I can pass off to the customers in terms of costs.”

Running the numbers, Stacey estimated that dinner could lose $30,000 this year. Shortly after the new year began, dinner service was discontinued.

Nevertheless, she believes—and has the hard numbers to back her up—that The Trails is built to be a powerhouse at breakfast and lunch, and will be a profitable, sustainable business for years to come.

Looking back on her experiences, she says applying to be on the show was one of the best decisions she ever made.

“The restaurant would have definitely gone out of business,” Stacey says. “We wouldn’t have made it to that summer if we didn’t know the show was coming. Working with Robert was an exercise in humility and an opportunity to reassess what worked for our business and what we needed. He was so wonderful and presenting ideas and ways that we could change in order to be successful. I am so grateful for everything he and his team did while they were here.”

She also says that follow-up calls from producers in the years that followed were reassuring, “They don’t just leave you high and dry.” Producers even asked her to mentor other restaurant owners who were appearing on the show; she coached them through the tenuous spot between when the show films and when it airs.

“I just really appreciate all of the opportunities that came out of this,” Stacey says. “How much Robert can inspire people with his burly, icy stare… it’s amazing. He uses his talents and his gifts for good and I am so grateful that we were recipients of that. People ask me all the time, ‘Is he really that mean?’ and I say ‘He’s not mean at all! Not even a little. He means for people to succeed and he means to motivate people.’ It’s like being a parent. Sometimes you need to motivate in ways that are uncomfortable. I respect that so much.”