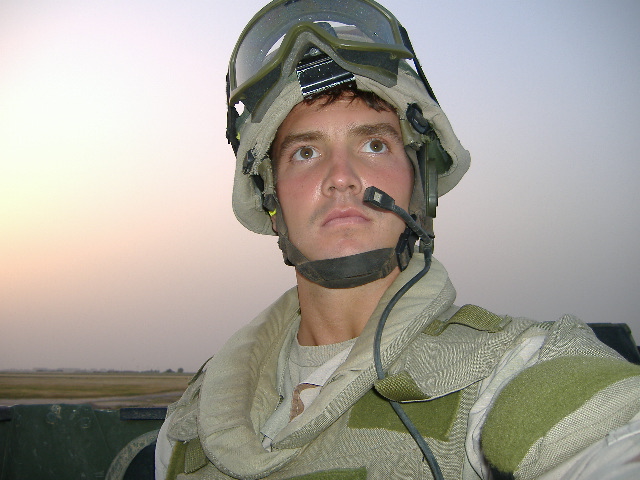 He returned from the Middle East with no safety net and a headful of nightmares. Now retired from the Air Force, Nathan Mikeska is on a mission to pull veterans out of the same hole from which he escaped.

One night in 2010, three years after his honorable discharge from the Air Force, Nathan Mikeska found himself speeding around Savannah, GA, after a few too many drinks. A cop pulled him over, and since Mikeska’s inebriation was obvious, he was certain to go to jail. Only that didn’t happen.

Mikeska looked at the officer who pulled him over and for whatever reason, let it all spill out: the images of grim death that he couldn’t get out of his head, the adrenaline that backed up in his bloodstream after living life on the edge during three deployments to Iraq, the total lack of direction he now felt. He had nowhere to go and no idea what to do.

Whether the cop was a veteran himself or had family or friends who struggled with the same things, Mikeska doesn’t know. He just knows the officer took pity on him, giving him a ride home in the squad car without so much as a speeding ticket.

“That night changed my whole mindset,” Mikeska says. “I knew that was my one freebie and that I had to get my act together.”

Today, Mikeska wants to give other veterans the support and direction he often lacked upon leaving the military. He is the founder of BROTHERHOOD COACHING, a new, one-on-one life coaching service designed specifically for military veterans. A personal trainer with a degree in nutrition and professional certified coach through Wellcoaches and the International Coach Federation, Mikeska can guide veterans with all aspects of their lives, helping them set personal and professional goals for the short- and long-term. Though Brotherhood is just a few months old, his client roster stretches from coast to coast, with coaching sessions taking place via Skype or phone call. 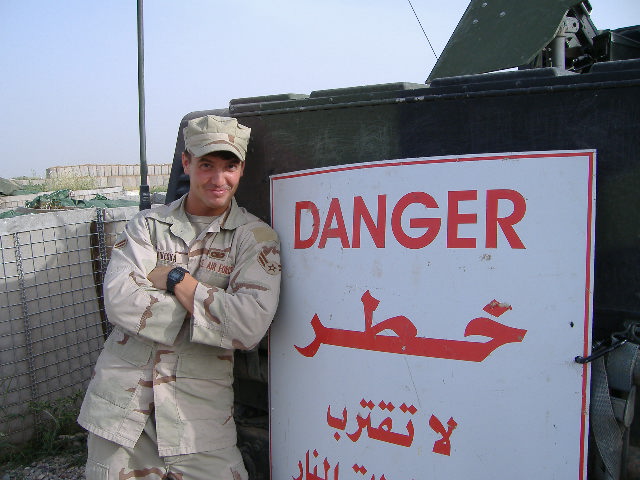 Whether Mikeska himself suffered from clinical post-traumatic stress disorder is an open question, but only because he, like too many veterans, never sought psychiatric help when he returned home from the Middle East. But as he describes the feelings he had and the images he’ll never forget, there’s no doubt the man has struggled with aftershocks. A member of the Air Force’s elite Security Forces unit, the 820th, Mikeska’s job forced him to come face to face with the brutal reality of the war. In military parlance, his job was given the mundane label of security and transport. But behind the bureaucratic coldness of that terminology was a ghastly truth: Mikeska was responsible for the transport of dead Iraqi insurgents to a morgue in downtown Baghdad.

“Dealing with those images and trying to get them out of my head—to stop seeing them and smelling them every day—that’s something I still struggle with,” Mikeska says, recalling the bodies loaded into a cargo truck with a tarp drawn over the top. “It’s always going to be there. But today, I’m happy to say I have more good days than bad.”

Mikeska enlisted in the Air Force straight out of high school in 2003, and served until he was discharged in 2007. Like all veterans who served in combat zones—especially in the early days of the Iraq war—he lived under an omnipresent threat of mortar attack, which insurgents could land right on the base where service men and women slept in cloth tents.

As part of a contingency force, Mikeska also spent a lot of time off-base. He delivered supplies from Baghdad to Kirkuk in the northern part of the country, and took part in combat patrols searching for insurgents and weapons caches. Walking through prisons where U.S. forces detained insurgents, he saw even greater horrors, like men who would gather small bits of stone or broken glass so they could cut themselves scrawl Arabic lettering or pornographic images in blood—possibly out of boredom or madness—on their cell walls.

He lost friends to IEDs, and like many veterans, lost friends to suicide. In 2005, he was deployed Stateside, but his stint in post-Katrina New Orleans offered no respite from the carnage.

“It was as bad as any deployment overseas,” Mikeska says. “This was before they were using the stadium to house people; they were just putting all these displaced people in a fenced-in area like farm animals, giving them a snack and a bottle of water… People were dying because they were stuck on their roofs for days and they would drink the contaminated water from the basin.”
During that deployment at a crowd control checkpoint, Mikeska earned an Air Force achievement medal for suppressing a would-be looter who was wielding a knife.

By any measure, his military career was a success, but when initially searching for the same in the civilian world, he struck out.

One of the tragic misconceptions surrounding combat veterans is the notion that transitioning back to civilian life might only be difficult if they suffer from PTSD—that they would have to have been mortally wounded or witnessed extreme, close-up destruction to suffer from it. Then, the cliché goes, the soldier comes home, where they face night terrors, flashbacks, and retreat under a desk at every loud bang. The terrifying truth of PTSD is that it can work in subtler ways, and stem from events that, on paper, might not seem fantastic enough to a layperson to cause serious mental anguish.

Beyond the imagery of war, Mikeska describes the hardest part of his transition as a simple yet inescapable problem of pace.

“You’re coming from a situation where you have all this adrenaline in a high-stress situation, and you suddenly return to the mundane,” Mikeska says. “So you’re going from very high-speed to low-speed, and you’re going from being part of a brotherhood—being able to trust everyone around you with your life—to having a much smaller circle and not being certain of who you can count on.”

This hit Mikeska hard when he moved to Savannah, GA (he grew up in Kittanning, PA) without knowing anyone, fueling a sense of loneliness and the loss of a safety net of squad mates. More significantly, he lost his mother, Holly Painter, to murder-suicide at the hands of her second husband in an alcohol-fueled incident in 2009. This, and the loss of a close friend and fellow veteran in 2013 to alcohol-related suicide, prompted Mikeska to give up booze for good.

“I saw what it did to my mother, what it was doing to me, and realized it was a time bomb,” he says.

Alcohol, drugs, and other risky behaviors like gambling as well as sex addiction, are common coping mechanisms in the veteran community, Mikeska says, a side-effect of warriors without a mission. His coaching service aims to get veterans on track before idle hands turn them to vice. After an initial consult, Mikeska immediately gets into vision planning.

“We use a lot of open-ended inquiry,” Mikeska says. “Where do they want to go? What do they want to see happen? What tools do they need? How do we utilize your military skills? Using these motivational interviewing skills, you can get some deep, effective conversations to get their minds working. It gets them realizing they do have the skills and realizing they can do whatever they set their minds to. Being in the military, it makes you great at so many things an employer would love to have: leadership, attention to detail, structure, punctuality, respect, discipline, following the chain of command, communication. They already have the skills they need to transition. A lot of them just don’t know it yet.”

Once the long-term goals for the next nine to 12 months are set, Mikeska walks it back to a stepping-stone goal of three months. That stepping-stone goal is then broken into weekly goals, all of which follow the SMART acronym, which stands for Specific, Measurable, Action-oriented, Realistic, and Time-bound.

“We touch base every two weeks with SMART weekly goals,” Mikeska says. “They experience a little taste of success or a win off that. I’m not there to see them fail, which would only create more anxiety. These goals give them relief. It builds confidence. And ultimately, the client is in charge of their destination. I’m there to co-create the conversation and act as a guide.”

His own journey from loneliness and lacking direction to veteran life coach was aided by his wife, Katherine, whom he met in 2012 and married in 2013. Little by little, the details of his deployments tumbled out, and the more he shared with her, the more relief he felt. Katherine is a devout Christian, and though Mikeska grew up religious, he drifted away from his faith over the years. With Katherine at his side, he went back to church and found solace there, as well.
Mikeska’s close friend Mike Gittleson, with whom he shared a pair of deployments overseas, has also been an instrumental sounding board.

“He’s been one of my closest friends for 16 years,” Gittleson says. “We might not live close to each other anymore [Gittleson lives in Massachusetts], but we tell each other everything, and we know each other inside and out. When we first got out, we thought all our issues were the norm and we were trained to deal with it, so we didn’t talk about it. Today we do talk about it. We say, ‘Hey, this is bothering me.’ We communicate.” 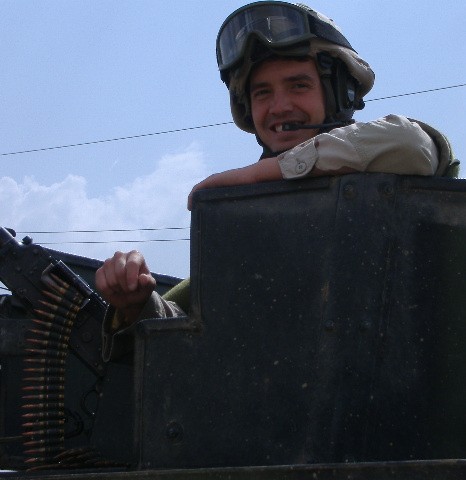 “What Nate is doing—it’s not something you can just wake up, put on a shirt and tie, punch in at the office, and do it,” Gittleson says. “This is a role where he’s gonna make himself available to people all the time. I think he’s suited for this because people gravitate toward him. He puts people at ease and I think that’s one of the reasons we became great friends.

“But more than that, he’s an incredibly hard worker and he doesn’t give up on the mission. He wanted to become Airborne and people doubted him because of his stature. He worked out day and night and got it… I’m older than Nate, I was in the service before him, but I’ve always looked up to him.”

For his part, Mikeska says the ultimate value he delivers comes from having walked the path ahead of the men he’s now coaching.

Mikeska offers a free 30-minute phone consult to all prospective clients. Learn more HERE. You can e-mail him at MikeskaNathan@gmail.com, or call him directly at: 912-227-2292

Mikeska proudly supports the Semper Fi Fund, a military charity he credits with saving his life. For more information on the fund, click HERE.