OUTPOST SPECIAL: This review is part of a special feature surrounding the film The Outpost. Click the following links in all caps to read our interviews with Medal of Honor recipient TY CARTER, director ROD LURIE and the author of The Outpost book, CNN’s JAKE TAPPER.

The story behind the film every American needs to see.

To be stationed at Combat Outpost Keating in Kamdesh, in the Nuristan province of Afghanistan, was to live every day under the specter of death. Surrounded by the steep mountains of the Hindu Kush on three sides, the soldiers there were regularly fired upon by the Taliban, and when word got out that the United States was finally closing its most dangerous, isolated combat outpost, the big attack finally came. On October 3, 2009, three hundred Taliban fighters, armed with rocket-propelled grenades, recoilless rifles, and anti-aircraft guns, opened fire on Outpost Keating, knocking its mortar pit out of commission and breaching its outer perimeter in the first hour of the battle.

The Taliban had counted on its overwhelming force—and the fact that the Americans were winding down operations—to be enough to overrun the position. They hadn’t counted on the ferocious resistance of the outpost’s remaining occupants, who fought for hours to beat back the attack and force the Taliban to retreat. Eight U.S. soldiers died that day, another 27 were wounded, and it is estimated that 150 Taliban fighters were killed. And while everyone at the outpost fought tooth-and-nail to win the battle, two soldiers in particular—Ty Carter and Clint Romesha—were singled out for their gallantry and risk to their own lives above and beyond the call of duty, and both earned the Medal of Honor for their actions that day.

In Romesha’s case, it was for conducting reconnaissance of the battlefield and leading the fight to re-secure it. This included fighting valiantly through shrapnel wounds, surviving an RPG explosion on a generator he was using for cover, and killing a large number of enemy fighters—including three who breached the perimeter.

In Carter’s case, he successfully ran ammo to resupply defense positions, twice making it through a 100-yard gauntlet of intense enemy fire, used an M4 carbine rifle to apply deadly force to the Taliban attackers, applied lifesaving first aid to a comrade, and ran a fellow wounded soldier through enemy fire to safety.

And yet, for all the extraordinary circumstances and heroes of the Battle of Kamdesh, it wasn’t even the top story in the United States the next day. When CNN’s Jake Tapper began reporting on the battle and interviewing the soldiers involved, he soon realized this wasn’t just an incredible story of valor, but a chance to educate an American public—long since numb to endless foreign entanglements—of what had really gone wrong in Afghanistan. His exhaustively reported book, The Outpost: An Untold Story of American Valor, was published in 2013 to wide critical acclaim.

Tapper’s book then provided the basis for Rod Lurie’s new film, The Outpost, starring Scott Eastwood, Caleb Landry Jones, and Orlando Bloom. It saw a limited theatrical release this summer (on account of Covid-19 restrictions) and is now available for rent and purchase and is streaming on Netflix.

Both the book and the film are essential; the former to get a complete history of Combat Outpost Keating and the broken decision-making process that needlessly put so many of our soldiers in harm’s way, and the latter because it is, in the opinion of this magazine, the best war film born of the modern era.

We don’t make that statement lightly. Hollywood has produced several truly great ones in recent years from Zero Dark Thirty and American Sniper to The Hurt Locker and Lone Survivor. With no disrespect meant to any of those fine films, Lurie’s vision of modern war is simply the most authentic and raw take yet. A veteran himself and a graduate of West Point, Lurie relied heavily on the first-person accounts of the men who served at the outpost and worked diligently to reassure the families of the fallen that their losses would be treated honestly and with dignity. 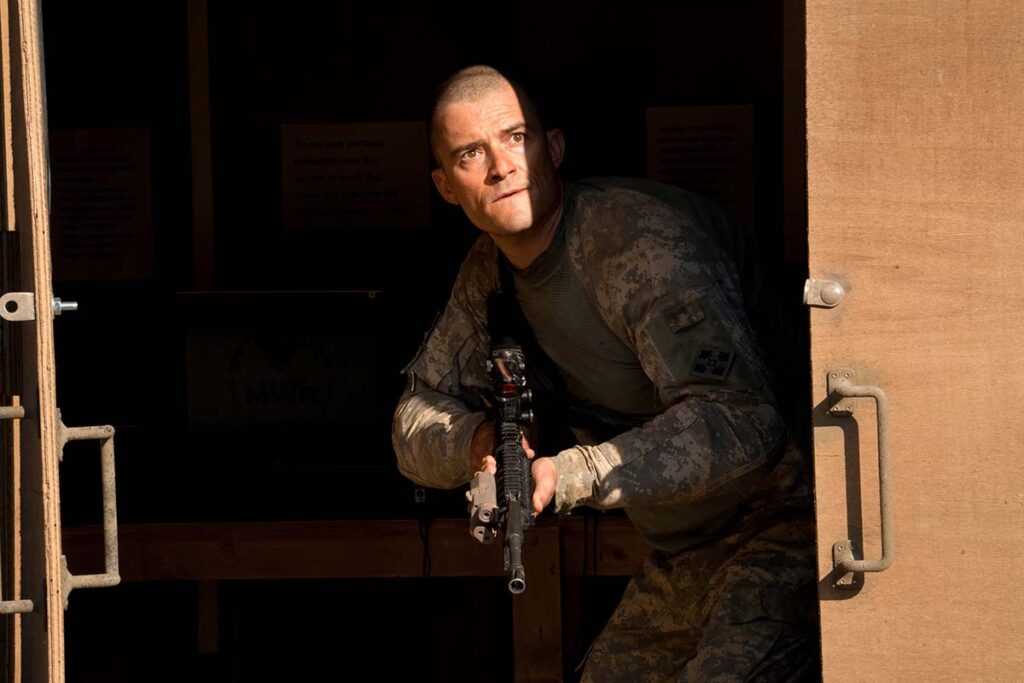 Orlando Bloom shines as CPT Ben Keating. The Outpost is a rare combination of breathtaking intensity and artful restraint.

What The Outpost accomplishes—especially when you consider its tiny budget (a reported $18 million according to IMDb)—almost defies explanation. Using handheld cameras to capture just about everything, Lurie puts you in the thick of not just the action, but the day-to-day monotony of life on a stripped-down combat outpost. Throughout the two hours, you become intimately familiar with the soldiers’ struggles, both big and small. Then, when the frenetic action sequences do begin, they punch twice as hard as they normally would.

The first hour of the film gives you everything you need to understand about what life was like on the outpost and why it needed to be closed. Nearly the entire second hour of the film is dedicated to the Battle of Kamdesh. In the hands of a conventional action director, words like overwrought, melodramatic, or exhausting would be appropriate to describe such a lengthy sequence. But according to Lurie, “honesty” was the word that guided all his decision-making. To wit, there is a restraint to everything you see, from moments of victory to moments of loss. Dramatic music never arrives to tell you how to feel.

The end result feels anything but “Hollywood”. It feels real. It grabs you by the throat and stays with you long after the credits roll. It’s brilliant and sad, at once thrilling and cathartic. More importantly, it’s something every American needs to see.

But don’t take my word for it. Click the all-caps links to see what TY CARTER has to say about the film. After that, check out our interviews with ROD LURIE and JAKE TAPPER to see how The Outpost made its journey from true events to an instant cinematic classic.

Watch The Outpost on Netflix HERE.