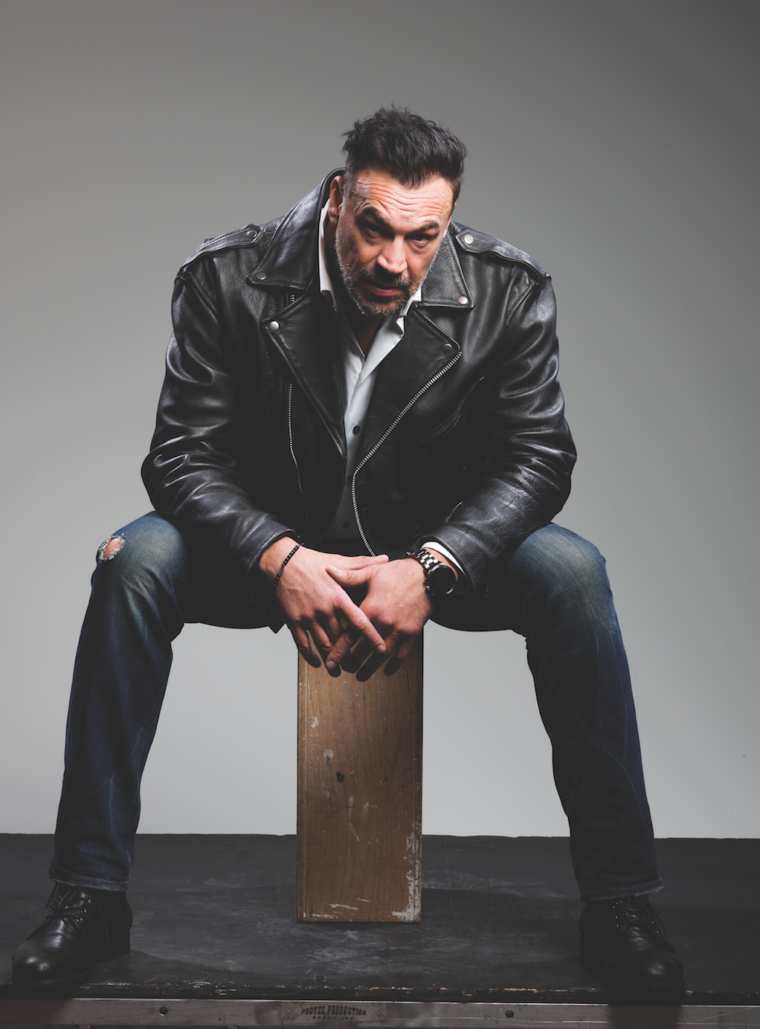 The Canadian boxer-turned-actor has enjoyed a long career of playing sci-fi tough guys in everything from Battlestar Galactica to War for the Planet of the Apes. He took a break from his upcoming film Crimson Point to chat about the new season of Van Helsing, his passion for storytelling, and being grateful for everything—even life’s setbacks.

Robert Irvine Magazine: Your filmography is enormous and has a ton of sci-fi in it. From Van Helsing to Apes, going all the way back Battlestar Galactica and Stargate, this is the genre where you’ve left your mark. Is this by design? Or do you give every kind of project equal footing and just look for good characters?
Aleks Paunovic: That’s the bottom line: wanting a good character to play. It’s just been really interesting with the opportunities that I’ve had in sci-fi, like some of my best friends are in sci-fi. Before I really started working in the industry my best friend Tahmoh Penikett was one of the leads on Battlestar and so when I got to work on that, it was hugely due to him. Then the opportunity kind of opened up for me and I just kind of fell into it. I’ve just been really fortunate because I think the sci-fi world is so devoted and dedicated. I had no idea. I’m over the moon that I get to be in that kind of a family.

RI: You belong to the Internet now. You and Karl Urban.
AP: Right? Yeah, I feel super fortunate.

RI: You were a boxer until 1999 when you were injured. How’d you get hurt?
AP: I have three generations of boxers in my family. Boxing has always been a huge part of my life. My dad trained me, I watched it all the time, and I dissected it as a science, not as a fight.

I never looked at boxing as two people that were really mad at each other going at it. It was a psychological warfare and two people testing their skills against each other in the most primitive way. It’s always been a parallel for life struggles to me.

Then in ‘99, my dad was my coach and there’s a pre-Pan American trial, so I was fighting against Argentina and it was just a punch that I threw that kind of tore my rotator cuff. Then that was that and while I was recovering from my surgery opportunities started to kind of just drop in.

During that time I was still playing in a band—I played bass guitar in a metal band called Specula Black—but then I started getting opportunities to be an actor and I just kind of figured like that’s the way I want to go. I’ll keep on training, I’ll still spar but I think this is the avenue I want to go to.

RI: If you look back now, are you grateful for that injury? Because you probably would have still been pursuing competitive boxing instead of taking a look at all these other things that were open to you.
AP: Oh, you have no idea how grateful I am. Boxing is a tough sport no matter how much I love it. I understand sacrifice. I understand the idea of: You can’t just walk into a ring and try to fight. You have to train and you have to have people in your corner. For me, I understand it and I feel like if the injury wasn’t there… You’re always that millisecond away from ending your career, going from an up-and-comer to a has-been. It takes one punch.

I did love it so much that I wanted to put everything on the line with it and that’s not any disrespect to any boxer out there. Because I idolize anybody that steps in the ring. Those were just the cards that I was dealt to where I was like, “You know what? I see a longer future over here.

If I start now and if I lay some groundwork that I could have a really long career in this industry and I think it should start now.” I just fell in love with the art of telling stories. To have both in my life still, I’m very grateful.

RI: So you still train as a boxer? You’ve stayed in phenomenal shape.
AP: Yeah, I definitely try to get some shadowboxing in, or hit the heavy bag or even put on some mitts. Tahmoh Penikett and I always go to the gym and hit hand pads and push each other. We always go like I would never have gotten that workout if I was by myself. We help each other in that aspect of it.

RI: Most people don’t realize if you’re not in that industry that making films is pretty physical. There’s very long days and even if it’s not a physical scene, it’s all about projecting energy. Would you agree that filmmaking is pretty grueling?
AP: It absolutely is grueling. I mean I just finished at three o’clock in the morning last night, and I’m up working on my lines for later. I was there 14 hours and you’re always troubleshooting. Which I really love cause you get a great team together and things may not be exactly the way you read it on the script. Then you just see how you could amalgamate it into something that still tells the story with the environment that you have. That takes takes a lot out of you.

I do a lot of action stuff and I love doing this action stuff. Fight scenes for six different takes… it can get to be a lot, but when you love what you do, I’ll do it for hours, man. I just so enjoy it and so enjoy the collaborative effort that everyone puts forward in this team aspect. I’m in love with it, so I don’t mind the long hours.

RI: That’s a recurring theme with anyone at a high level of success that we speak to. They love a challenge. They love to problem-solve and be around other creative people who can do the same. That value of rolling up your sleeves and digging in no matter what’s going on… I’m guessing a lot of that came from your father since he was a fighter.
AP: Yeah, I got a lot of that from him, but also my family’s been really important to me and the idea of a team has always been super attractive to me.

A team without synergy isn’t going to win and it’s not all about winning, but it’s so beautiful to watch when people just know what the next step is. Then, if it doesn’t happen to see them working it out and then it does happen. The idea of getting a bunch of energies together in this kind of water-like flow has got to be the coolest thing that I could ever experience.

With boxing, it’s still just the trainer and the boxer to have a flow to understand each other. There’s the communication in boxing, needs to be on point and everybody on the same level. If they’re not there, then you’re not picking up with what the other person’s dropping off.

You may be finding a bunch of holes in your work. I just find that really, I conceived that part of me from boxing that I have in the film industry. I just loved the idea of compassionate and loving way of communicating and getting things done and getting to the end.

RI: Van Helsing comes back on September 27th (9pm on SyFy) What can viewers expect in the new season?
AP: This season is just extremely fun. I feel like we just keep on upping our game. We’re introducing some amazing characters, some new characters that fit beautifully with it. And you know, one of the coolest things that I felt about the show was Trisha Helfer as Dracula.
I think she’s the first female Dracula. And when they say that a powerful female actress is going to join the cast, to be playing Dracula, you just kind of shake your head and go, “Oh my god that is awesome!” I’m stoked that she’s a part of the show.

RI: Talk about your diet. Are you an all-things-in-moderation type of guy or do you adhere to a specific diet to stay in shape?
AP: I believe in all things in moderation. I love eating. I love food. For me it’s this big thing of I need to get my workout in so I can enjoy the food. I’m not looking for a super-low bodyfat; I’m just trying to enjoy that aspect of my life. Chicken breast is a staple that I’ll have four or five times a week but … yeah, I like all types of food.

RI: You’ve made a career for yourself in an ultra-competitive industry. With regard to general success, what advice do you have for readers? Especially those who might feel stuck.
AP: The biggest thing that has helped me is to realize everyone’s journey is different but we are not an island. Everyone has been in that position—I don’t care where you’re from—everyone has been in a position of feeling stuck.

Paunovic is partners in Wonderlight Entertainment, a production company based in his hometown of Winnipeg. “I’m just so grateful and honored to be apart of that to be bringing more jobs in the city that I grew up in,” he said.

When you realize you’re not an island and other people are going through the same things, that can give you hope and inspire you. One thing you can never do is say, “Aww, I should have done this ten years ago. I can’t believe I’m in this spot. Why can’t I be further ahead like that person?” Comparing and looking to the future and looking to the past in a negative way is unhelpful. So sit back and think, “I’m here and I’m just going to be a little bit better each day,” and that has always helped me. You need to center yourself.

Sometimes it’s just me writing my to-do list. If I haven’t written one in a week, that helps me find my center and keeps me focused. So that’s the advice I would give: Live in the present. What can you do right now? And understand that you’re not an island and that you don’t have to be closed off and struggle alone.

RI: The stuck person will try to poke holes in any story of success. “Oh, Alex, you’re six foot five. You’re lucky. Casting directors must love you.” Meanwhile, you as a positive person probably never see the glass as half-empty or half-full. You’re always thankful that you have a glass.
AP: That’s right on point. It’s so interesting because you can see someone with nothing, but they have a huge smile on their face because their heart is full of joy. Everyone’s going to be faced with obstacles. Everyone’s going to face tragedy. There’s no easy way through suffering. You still need to mourn. Even if you lose your job or something like that, you need to mourn it because it meant something to you. But then you can say, “Ok, I’ve mourned. Now we can move forward.”

Paunovic stars as Julius in SyFy’s Van Helsing. “This season is just extremely fun. I feel like we just keep on upping our game.” Season 4 premieres on September 27. Watch the trailer HERE.